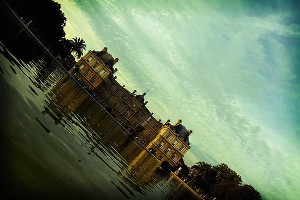 One advantage of transatlantic travel is the early morning rising often following the exhausted tumble into bed after arriving home. I'm taking advantage of the still-dark morning to catch you up on the rest of my trip to Paris.

On the plane home, the man sitting next to me asked what I liked best about my time in Paris. I gave him some stock answer about how it was too difficult to pin down one thing, but the food, parks, perfume, etc., were wonderful. After thinking about it, I came up with a different answer: What I really liked best were the surprises.

For instance, one night March and I had dinner at La Mère Agitée, a tiny restaurant around the corner from our apartment. The Mère herself greeted us with "I'm not ready yet! Another fifteen minutes!" as she rushed between the kitchen and the downstairs dining room despite our having made the reservations the night before at a time she had announced as "parfait". From the bar (where she was pouring herself a stiff pastis) she said she normally had about five people for dinner, but tonight there'd be twenty. She asked if we wanted a glass of wine, and we suggested maybe a carafe, to which she said "non" then plunked a bottle of peachy Vaucluse white on the table as she whooshed by.

While she fretted downstairs, a fresh-faced boy came by and announced that since there were so many people that night, we didn't have any choice in our menu. We'd be having duck pâté, ham and mushrooms with a calvados cream and pasta, and a pistachio-dried apricot cake for dessert. We settled back as a diverse flow of mostly men filed in, greeted us with "Bonsoir Mesdames", then went downstairs. The restaurant was chock-a-block with art and restaurant supplies: a shrink-wrapped bundle of water bottles by the door; towering jars of homemade preserves; an underlit portrait of the Mère's elderly dog, now retired to a farm in Normandy; a small, beautiful painting of Mary and the baby Jesus; a grainy blown-up photo of a mustachioed man and his silken terrier; dusty plants; and a messy spread of accounts and newspapers on a table by the bar.

Then the wonderful surprise: from below us came the hearty, round voices of men singing. It turned out the large party that night was a men's choir that specialized in French military songs. Despite the heaping bowls of food that went downstairs, I don't know when they had time to eat, because nearly two hours of songs about patrimoine vibrated the wood floors.

As we sipped our post-dinner calvados, members of the choir left one by one, most stopping to say goodnight to us. The Mère sat with us to see if we'd enjoyed our meal, and we told her we liked it better than the mediocre dinner and downright laughable service we'd had at Alain Ducasse's Aux Lyonnais. After that, when the occasional baritone tipped his hat goodnight at us, she shouted at him, "They had dinner chez Alain Ducasse and like this better!"

This post is getting lengthy, so I'll just highlight a few more of the surprises I loved so much:

The warm, sweet, almost cardboard aroma of the metro platform after a train has left. What is that smell? If I did my own Field Notes from Paris this smell would form its base.

The high school orchestra playing the James Bond theme song in the Luxembourg Gardens on a sunny afternoon while runners competed in the Cours du Senat looping through the park. Also, I loved the park's rigidly beautiful espaliered apple trees in the corner near where the bees are kept.

The Butte aux Cailles. When I went to graduate school for six months in Paris, I walked within blocks of the Butte nearly every day, but for some reason I never ventured into it. Next time I go to Paris I want to stay on this hill of narrow, winding streets and sit in its cafés, then walk along the leafy Tolbiac street and stop by the Eglise of Saint Anne, patron saint of vintage clothing dealers.

Sniffing tuberose absolute and other raw materials with Denyse of Grain de Musc, both at our apartment and in her lush, bohemian apartment with wild thing Jicky the cat (more on raw materials for another post.) Also, sniffing the strikingly obvious Jacques Fath Iris Gris mixing with ambient cigarette smoke and wondering why — like sunlight or creek water — this fragrance isn't with us now.

Seeing classics like Rochas Femme and Guy Laroche Fidji on the Marionnaud shelves next to the latest department store flankers shelves.

The streams of bicycle riders, helmetless, coats flapping in the wind, braving the traffic. I don't remember bicyclists when I was last in Paris. If I'd had a credit card with a chip, I would have been on a Vélib' in a heartbeat.

Listening to a husky, long-haired piano player sing "The Sunny Side of the Street" as I sipped outrageously priced Armagnac and March a peppery Scotch at the Closérie des Lilas.

Biting into a creamy Paris Brest pastry. Always thinking of it as "Paris Breasts."

And more. There's a lot more. But the sun has come up now on my first morning home, I've had a few cups of coffee in my regular morning mug, the cat is sacked out in front of the heater, the dog is napping on the bed, and it's time to get back to reality.

Top image is Parc du Luxembourg by Eljoundi at flickr; some rights reserved.