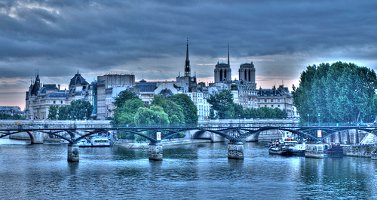 Coming to Paris was like being inducted into a cult. It started with sleep deprivation — an all nighter on a plane with the only sustenance being a trashy novel, a month of old New Yorkers, and cellophane-wrapped portions of food on a plastic tray. The captain (is it the same captain for every flight? I swear they all sound the same) announced it was 5 degrees in Paris and sunny. At last, the plane pierced a fluffy layer of clouds and we touched ground. I was grateful to leave the dry, cramped quarters of an Airbus to join the river of cranky travelers streaming for the metro.

The train clicked into town, braying a familiar tone when its doors closed. First we passed parking lots and industrial buildings covered in graffiti, then Soviet-style high rise housing complexes. A 19th-century building with a duvet spilling out the window to freshen in the sun and the red diamond of a tabac down the street hinted at the Paris to come. Billboard-sized ads for movies, cheap clothing, and, strangely, for a Paul Auster novel plastered the train stations. Then the train dipped below the city's surface into the sulfurous air of the Gare du Nord.

Exhausted, hungry, but thrumming with the excitement of having arrived, I emerged from the metro at Pont Royal to motorcycles, students dodging traffic, glorious architecture, and fresh spring wind blowing my hair in my eyes. I had the feeling of having crossed over from real life into a movie.

March and Louise met me at the apartment we rented. To respect their privacy, I won't say much about them, except that I hit the jackpot for travel companions. Our apartment is shabbily beautiful, with a fireplace in every room, including the bathroom, and elaborate plaster moldings painted over a dozen times. Closing the shutters last night from my seventh floor window, I could see the lights of cars moving down the Boulevard du Montparnasse below and clay chimney pots sprinkling roofs. The apartment's owner boasted the place was tastefully furnished, but to me it confirms my hunch that when God created France, she blessed it with savoir vivre, then balanced the blessing with bad pop music and loud wallpaper.

After lunch at Le Bullier around the corner (a tartelette covered with ratatouille and tuna, and a salad with a wonderfully biting vinaigrette), we walked to the Bon Marché. Right inside the door was a tester for the new Penhaligon's Orange Blossom — I only tried it on paper, but it was a pure, lovely orange blossom. Inside, I was able to try Voyage d'Hermès (peppery and fresh) and Christian Dior Diorama (a low-rent Amouage Jubilation 25). Dior also had Miss Dior in Eau de Toilettte and parfum, as well as a concentration called "Esprit de Parfum" which the saleswoman explained was more concentrated than Eau de Parfum, but less than extrait. Miss Dior's skank had been polished away, which might please a lot of people but made me sad.

Next we went to the Parfums de Nicolaï on rue de Grenelle where I broke down and bought a bottle of Le Temps d'une Fête Eau de Toilette. The saleswoman loved perfume, and it showed. She mourned the loss of the old chypres and described her perfumes with real passion, all in a sultry but friendly voice. Plus, we were into everything — spraying testers, wetting reams of paper strips, and raiding the sale table, and she was great humored the whole time.

The rest of the afternoon we spent wandering the left bank, stopping for a coffee and lemon tart and looking in store windows. I felt wired and drained, like I'd had two stiff drinks and two double espressos at the same time. I could barely move my feet, but I couldn't stop walking, looking, pressing my hand against a crumbly stone wall to try to bring home the fact that I was here and not in a trance. We passed La Palette, where men smoked cigars and played cards. We stood on the Pont des Arts and looked up and down the Seine as we occasionally raised a wrist or arm to our noses to catch the dry down of something nice.

Finally, we walked up the Luxembourg Gardens to the apartment. In the park it must have been dog social hour. A pint-sized mutt was hassling a boxer while two young women sat on a bench with their Jack Russell puppies. The leaves on the chestnut trees were curled and small, just barely ready to brave spring. In the apartment I cut up a baguette and made jambon-beurre-fromage sandwiches, which we washed down with a few glasses of Sancerre. Then a bath. Then, after 30 hours awake and jangled by the electricity of Paris, I slept like the dead.

[Ed. note: if you didn't know Angie was in Paris, then you must have missed Perfume and Travel. Tomorrow we'll post more of her adventures in Paris.]