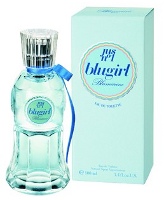 Blugirl, the youth-oriented line from Blumarine (see Blumarine Bellissima), will launch Jus No. 1 in April. Jus No. 1 was developed by perfumer Christine Nagel.

An initial zesty top note of white grapefruit, tangerine mandarin and lemon combined with “a sunnier aspect” that conjures up the fresh scent of sea and sand. Freesia, magnolia and jasmine were added to offer a sparkling heart, described as “Champagne bubbles.” Romantic base notes include musk, sandalwood, amber and touches of vanilla.

Blugirl Jus No.1 will be available in 50 and 100 ml Eau de Toilette and in matching body products. It is not expected to reach the US until the end of the year, when it will be exclusive to Nordstrom. (via wwd)