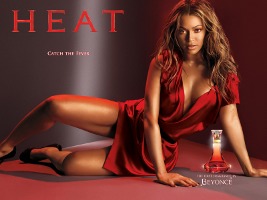 You can tell the potential of a celebrity fragrance brand in its first few days in store. This is off-the-chart.

That's Terry Lundgren, CEO of Macy's, noting that Beyoncé's debut fragrance, Heat, is already flying off the shelves.1 Coty, who hopes that Heat will "re-energize the celebrity category", must be thrilled.2

Heat is a warm fruity musk; it opens on lots of peach-flavored hard candy over midding-dark, nondescript florals, and is a little loud for a few minutes3 (the notes: red vanilla orchid, magnolia, neroli, blush peach, honeysuckle nectar, almond macaroon, crème de musk, sequoia milkwood, tonka bean and amber). After that, it's softer, easier to wear, although the sweetness never dissipates more than slightly. The dry down is a lightly spiced amber-y/woody musk, still quite fruity. It isn't really creamy, nor is it as edible as it sounds (the almond macaroon is pretty subtle, or else it got beaten into submission by the peach candy). Perhaps there are some natural materials in there, but as is so often the case with mid-tier celebrity fragrances — and for that matter, with mid-tier designer fragrances — it doesn't much smell like it.

Heat is warmer than your average celebrity fruit-fest, but it never crosses into floriental territory — someone on MakeupAlley described it as Queen by Queen Latifah's little sister, and that's apt. I don't find it even slightly sexy, and it isn't what I'd call memorable, but it doesn't much matter: it's by Beyoncé and it isn't a complete mess. People will buy it. 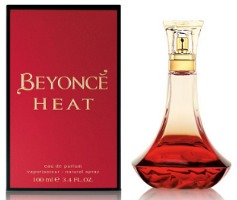 Beyoncé Heat was developed by perfumers Claude Dir and Olivier Gillotin. It's available in 30, 50 and 100 ml Eau de Parfum ($39-$59) and in matching body products.

3. I have a feeling that I would like Heat a lot less if I'd sprayed it on, but I'm dabbing. And while we're on that subject, I'll add that I'm enchanted by the sample packaging. It's a glass vial with a cap. Remove the cap, and there's an applicator with four little teensy holes so that you can rub a small amount on your skin. Very clever.