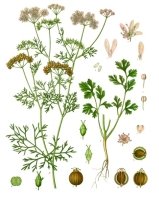 In general, I feel ambivalent about Kiehl’s and its products. The company has managed to sustain an impressive degree of its old-New-York, neighborhood-apothecary image (“Since 1851”) despite having been acquired by L’Oreal in 2000. Since then, however, its ever-expanding product range has started to seem diffuse and inconsistent, and the products themselves are often over-priced and not nearly as nature-based as they sometimes claim to be. Still, I keep going back for Kiehl’s Coriander-scented body products; I’ve been hooked on this fragrance for over five years, and I haven’t found anything to replace it.

Kiehl’s Gently Exfoliating Body Scrub is a relatively recent addition to the line, but it’s one of the newer products that I enjoy; it’s conveniently packaged in a flip-top tube, and it has a lightly-foaming formula with small exfoliating particles that feel pleasantly scrubby, but not scratchy. The Deluxe Hand & Body Lotion with Aloe Vera & Oatmeal is actually fairly lightweight, so if you have seriously dry skin, you’ll need something more concentrated. Both products are packed with the sorts of ingredients that I normally try to avoid when possible: sulfates and plastics in the scrub, silicones and parabens in the lotion, many mysterious multi-syllabic chemicals in both. (The natural ingredients, like aloe vera and chamomile extract, appear low on the ingredients lists.)

Nevertheless, I keep going back to the Kiehl’s counter, because the Coriander scent trumps everything else about these products: it’s fresh and comforting at the same time, and it’s hard to define, not exactly green or fruity or sweet, but a little of each. When we see coriander bottled as a cooking spice, it’s the dried fruit of the plant; is this how it smells when it’s still alive and growing?  I’m not a botanist, and I don’t know the answer. I just know that I like this scent for its odd balance of creaminess (it has an almost milky aspect) and doughiness (it reminds me a little bit of fresh almond-filled pastry). There’s also just a hint of herbal leafiness hovering around the edges (after all, cilantro is another part of the coriander plant). I’ve been wearing the lotion under not-quite-gourmand fragrances like Frederic Malle’s L’Eau d’Hiver and L’Artisan Parfumeur’s Bois Farine, which it seems to complement well.

Kiehl’s also sells Coriander "essence oil" in a roll-on dispenser; this oil smells slightly greener and livelier than the body products. I don’t own it, but I’ve tested it in stores, and I’m tempted yet again.