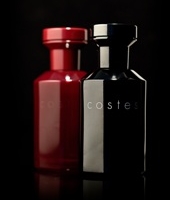 The original Hotel Costes fragrance, once called Costes but now presumably Costes No. 1 to distinguish it from their newer eponymous scent, was something of a cult favorite, although I don't hear about it so often these days — is anyone out there still wearing it? At any rate, it was done by perfumer Olivia Giacobetti and was based on the hotel's signature room fragrance.1 Giacobetti also did their new fragrance, Costes No. 2, which was reportedly "inspired by the Hotel's signature rose bouquets and the recently opened rose florist shop"2 (the notes: benzoin, cinnamon, Turkish rose, geranium, orange blossom, and gaiac wood).

If you're after a boatload of roses, though, be warned that you won't find it here. Costes No. 2 is, first of all, a very quiet scent: my advice to anyone trying it from a sample vial is to apply as lavishly as you can — this is probably a fragrance that is better sprayed than dabbed. The opening is spicy and lively, with lots of cinnamon, but it softens rapidly, and from there on in, it's one of Giacobetti's paler, airier fragrances.3 It's clean and smooth, and smells like a lightly decorated clean musk as much as anything. There is orange blossom, and a whisper of rose, and the benzoin is pronounced in the earlier stages. There's just enough wood to keep it from floating away altogether.

If you're looking for a clean, crowd-friendly fragrance for summer, something that will stay close to the skin and not overwhelm on the hottest days, Costes No. 2 might be perfect, and if you're willing to accept that the soft aroma left on skin after 20 minutes is all you're going to get, then you could also say that the lasting power is excellent. For my part, I like ethereal fragrances and Giacobetti makes some of my favorites, but there just isn't enough going on here to capture my interest.

Hotel Costes No. 2 is available in 100 ml Eau de Toilette, $135. For buying information, see the listing for Hotel Costes under Perfume Houses.

1. The Costes room spray was spicier and less soapy than the personal fragrance, and I liked it best of the two, although I haven't smelled either in quite some time.

3. I found it to have considerably less "presence" than Giacobetti's Eau Egyptienne for Cinq Mondes or L'Été en Douce for L'Artisan, if that helps anyone.