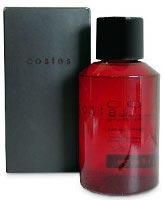 Today I am testing Costes, the fragrance created by perfumer Olivia Giacobetti and Rami Mekdachi for the fashionable Hotel Costes in Paris. The notes are lavender, bay-tree, coriander, white pepper, rose, incense, woods, and musk.

Costes starts as an aromatic herbal, rather heavy on the lavender and consequently a bit sharp. After a few minutes the coriander and pepper add a heavy dose of spice. I tried this on a test strip last year at Takashimaya, and pegged it as a spicy aromatic, but this is one of those fragrances that really needs to be tried on skin. Over the next half hour, it settles into a lightly spicy, soapy incense-woods scent with just a hint of rose. Eventually it smells like a lovely sandalwood incense soap, very soft and soothing, and close to the skin.

It is not quite my cup of tea — I rarely like soapy clean fragrances — but it is beautifully done, and very much in keeping with Giacobetti's minimalist style. It could easily be worn by either sex, and has developed something of a cult following since its release in 2004.

Costes is an Eau de Toilette, and the lasting power is average — about 3 or 4 hours. Other products in the Costes range include a bath gel, body lotion, massage oil, soap, room spray, and candle (the candle is said to be fabulous, but I haven't tried it).

The Eau de Toilette is available in a 125 ml glass bottle with stopper for around $129. For buying information, see the listing for Hotel Costes under Perfume Houses.