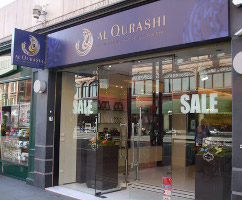 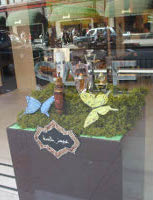 Ever since Mohamed Al Fayed became the owner of Harrods in 1985, there’s been a steadily growing Arabic feel to this corner of Knightsbridge. Apart from the shops, this is where you’ll find the highest concentration of mysterious figures in burkhas, and glamorous wives and daughters gliding up the Harrods escalators in head-to-toe black silk, with (real) Chanel handbags. It’s all rather exotic and intriguing.

It’s therefore not surprising that an Arabic perfume shop opened in 2008, directly across from Harrods’ main entrance. Al Qurashi is part of a Middle Eastern chain, and only the second store to be opened outside the United Arab Emirates and Saudi Arabia (the other one is in Paris). The owner, Abdul Samad Al Qurashi, has created custom scents for members of various royal families.

“There are 152 stores in the Middle East,” the sales assistant explained. “That means that we don’t attract a purely Arabic clientele — for most shoppers from the Middle East, we’re a name they’ve seen lots of times before. We actually get a lot of local Western shoppers for whom we’re something different.” 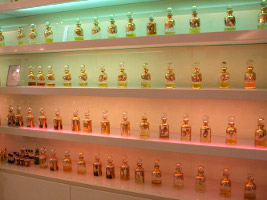 One of the novelties is that what the shop mainly sells is blends of essential oils. But not ten or twelve – there’s a wall lined with shelves carrying hundreds of gilded and painted bell-jars of oils. The idea is that you buy a small bottle — or bring one in yourself — and have the oils dispensed or mixed.

Some are soliflores (or whatever the spicy alternative is called), while others are blends. Many of the oils contain oud (they call it agarwood here), but not all. Some, I’m told, contain ambergris — yes, the real stuff, not the constructed ‘amber’ with which we’ve grown familiar. There are rose oils and musks. There are also some blended sprays for sale, but this seems more about pandering to western tastes than anything in Al Qurashi’s core inventory.

Wandering round the displays, you get a sensory feel for a different culture. There are hair perfumes and solid musk cubes for scenting clothes and body. “The perfumes are not like the fragrances you get in department stores here,” says the sales assistant. “They’re not intended to be strong at the start, but to last a long, long time without fading. The idea is for them to permeate clothing, cling, and become part of the wearer’s persona.”

In nations obsessed with keeping clean, the idea of allowing your clothes to remain unwashed but increasingly fragrant is…novel. But then, perfumistas know the delight of pulling on a sweater or a scarf that smells of last week’s scent, or even of someone else’s. The idea of aiming for perfume build-up is rather attractive, assuming you can avoid pizza stains down your front… 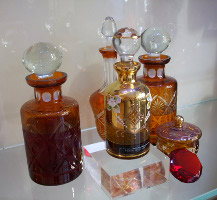 The oils are not cheap. A 12 ml bottle of “Pure Oud, 100% pure, from India, with hints of white musk: Khaltat al Nequa” will cost you £350, although there are cheaper possibilities in the store.

Although I’ve heard reports of indifferent service in oud-selling shops, I have to say that the young male sales assistant here was charming and helpful.

Nearby: Harrods looms over the shop. You're only minutes from the Amouages in the perfume hall. (Actually you’re even fewer inches from the Hermessences, in the hall directly opposite Al Qurashi.) 100 ft above you, Roja Dove presides over the Haute Parfumerie at the top of Harrods. Round the corner of Harrods (to the left), is a big SpaceNK, in Hans Crescent.

Getting there: Knightsbridge tube station, on the Piccadilly line. Follow the signs for the Harrods exit.