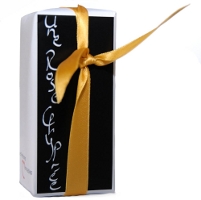 The other night, I was talking with friends, and for the first time this year I heard crickets in the garden outside. I said, "Wait, are those—?", and a friend cut in, "Don't say it!" She knew I was going to say the crickets' chirping was a sign that autumn was coming. None of us wanted to admit it. Seemingly overnight the slant of the light has changed. Mornings are cool, although afternoons can still drive you to seek shade. The air smells different. It's a bittersweet time of year because it is so beautiful but so short and signals that months of cold rain are around the corner. Those heartbreaking few days bridging the warm luxury of summer and the woodsmoke-tinged air of fall are to me what Tauer Perfumes Une Rose Chyprée feels like.

Andy Tauer, the founder and nose behind Zurich-based Tauer Perfumes, describes Une Rose Chyprée as "an oriental rose on a chypre base". He lists its notes as rose damascena, bay, cinnamon, bergamot, lemon, clementine, green Bourbon geranium, labdanum, oak moss, patchouli, vetiver, and vanilla. In the initial announcement about Une Rose Chyprée earlier this year, Tauer said that each 15 ml bottle of the Eau de Parfum contains one pound of steam-distilled rose petals as well as rosa damascena absolute.

The rose in Une Rose Chyprée isn't the full, fruity, blown rose of summer, but a darker, spicier rose joined by juicy citrus and definite cinnamon. What sounds on paper like a recipe for an aerosol air freshener turns out more like a freshly manufactured vintage perfume, if that were possible. Une Rose Chyprée's murky base smells like a moss-green tapestry hanging in a cold church. Now imagine that tapestry laid over a warm lawn and strewn with rose petals, torn bay leaves, clementine peels, and pieces of a wood cask that once held cinnamon sticks. I also smell a hint of something floral that almost vibrates, like narcissus, but it isn't listed in the notes and is probably an olfactory illusion.

Une Rose Chyprée is rich, full, and balanced. It doesn't lean too much into traditionally feminine or masculine directions. I think Une Rose Chyprée cries out for 1940s suits and peau de soie cocktail dresses, but it would do something nice for worn jeans, too. It is elegant enough for the opera, but friendly enough for an afternoon coffee. Really, though, the perfect time to wear Une Rose Chyprée would be sitting in the garden after dinner with birds splashing in the birdbath, the Italian plum tree heavy with fruit, and the promise of good sleeping weather ahead. And, yes, the sound of crickets.

Tauer Perfumes Une Rose Chyprée is a highly concentrated Eau de Parfum that comes in a 15 ml spray bottle ($75). The fragrance is golden and almost as viscous as Parfum. A few drops last hours. I'll need a bottle of it as soon as my sample runs dry. For information on where to buy Une Rose Chyprée, see Tauer Perfumes under Perfume Houses.