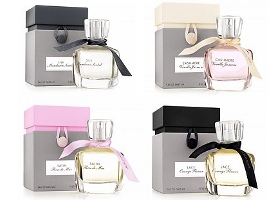 While Robin is on vacation, I'm continuing the annual tradition of hijacking the blog for a week of themed reviews. Last year we did drugstore scents. This year? A walk through the mall. Our first stop is at Victoria's Secret, where I was lucky enough to score a tiny black lace bag with samples of each of the four new Parfums Intimes.

First, let me say that it had been a long time since I'd been in a Victoria's Secret. I'm a girly girl, but Victoria's Secret was still a shock. I felt as if I'd walked into an exploded beauty pageant dressing room. That store must keep half of China busy making panties. To add to the air of unreality, sales associates roamed the floor wearing portable headsets, sort of like linebacker coaches, only cuter and using cleaner language.

And the perfume area! One wall was lined with the Secret Garden series of lotions, shower gels, and body washes in scents with names like Berry Kiss and Delicate Petals. You could buy seven of them for $35. A new line called "Pink" seemed to focus on the training bra set. The Dream Angels series (Dream Angels Heavenly, Dream Angels Desire, Dream Angels Wish, you get the idea) filled yet another shelf. A sales associate told me that Dream Angels Heavenly was the best selling fragrance in the United States. For the "I have a push up bra in every color" gal, one of the lines offered a bottle that purrs when you lift it and another bottle topped with a tuft of pink faux maribou. The Sexy Little Things line looks calculated to appeal to the classic bombshell type and features perfume bottles with bulb atomizers.

Parfums Intimes, Victoria's Secret's newest and most expensive line of fragrances, debuted in April. It consists of four scents, each named after a different fabric. According to Marie Claire magazine, Victoria's Secret's Vice President for Innovation spent six months perfecting the line ("that's three months longer than he devoted to his last hit," the article said). I was ready to be underwhelmed. But Parfums Intimes exceeded my snobbish expectations. Parfums Intimes may not break new ground, but they're nice.

Satin Rose de Mai (rose de mai, Asian honeysuckle, pink grapefruit, and mandarin flower) is a light, sheer rose with a little bit of an earthy, fruity, pear-like undertone. There's nothing powdery or old-fashioned about this rose, and yet there's nothing new happening with it, either. Still, it's a nice rose.

Silk Mandarin Santal (Chinese mandarin, sandalwood, mimosa, honeyed musk, and whitewood notes) was the most interesting of the four to me. It also had the most development. Silk Mandarin Santal goes on with a burst of orange that is a little too much like Tang for my taste. The Tang scent fades within five minutes as a warm sandalwood takes over. Then the sandalwood becomes peppery. To tell the truth, I was surprised that pink pepper wasn't listed in its notes. A touch of orange peel lingers into the finish.

Cashmere Vanilla Jasmine (Mediterranean purple orchid, jasmine absolute, cedarwood, and heliotrope) is a gourmand scent best saved for autumn. I've been testing this in 100 degree weather, and I don't recommend it for anyone prone to migraines. The fragrance explodes in the heat. Jasmine keeps the woody vanilla from turning straight into a praline. It wears like iron. I predict this one will sell well.

Lace Orange Flower (orange flower absolute, Chinese osmanthus, pink grapefruit, and watery dewdrops) is a feminine neroli with the apricot-like undertone of osmanthus and a touch of juicy citrus giving it a young feel. (Don't even get me started on "watery dewdrops".) Lace Orange Flower is the lace of a bridal gown more than of a bustier. It's pretty.

Final verdict? Someone who buys from the Secret Garden wall of bargain scents and who discovers Parfums Intimes is in for a treat. But once her bottle of Cashmere Vanilla Jasmine or Satin Rose de Mai is finished, she might find herself drawn to the richer world of Chanel, Hermès, and all the niche lines that beg to be explored. For that alone, Parfums Intimes has done a real service.