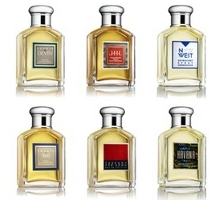 The latter two scents will not be released in the US, and the original Aramis fragrance, now known as Aramis Classic, will not be included in the collection. (via wwd)