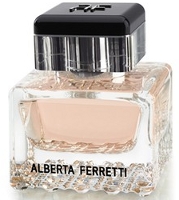 According to Ferretti, "I wanted to transfer my world into the fragrance, so that it would have a very precise identity and be highly recognizable". The resulting scent was developed by perfumer Sophie Labbé and features notes of freesia, pink pepper, bergamot, sweet pea, ylang-ylang, Casablanca lily, patchouli and golden amber.