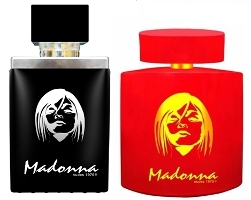 The Madonna Nudes 1979 fragrance duo, inspired by a series of photographs of the pop star taken by Martin H.M. Schreiber in 19791, will launch this month.

1. Madonna, who was then unknown and who was reportedly paid $30 for the photo session, apparently granted Schreiber all rights to do with the photos as he wished, and Schreiber has since published them and granted licenses for products ranging from handbags to fragrances (these are not the first fragrances under the "Madonna Nudes" name).