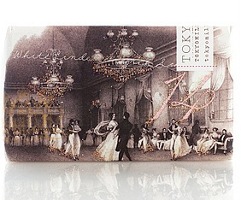 Tokyo Milk is a small company with a delightfully inventive (and surprisingly affordable) line of fragrances called "Parfumarie Curiosite" [sic], as well as complementary perfumed soaps. Although I enjoyed reading the descriptions of all the scents in the line, the floral-lover in me was most drawn to Waltz Parfum 14 (formulation not specified, but probably an Eau de Parfum, shown above left) and Waltz Perfumed Soap (scented, somewhat confusingly, with a fragrance blend called "Minuet 14", shown above right).

Photos don't really do justice to the sweet packaging of these two products, especially their sepia-toned illustration of mid-nineteenth century dancers promenading in pairs along the length of a ballroom. The label of the perfume bottle is applied to the back of the bottle, so that the picture appears through the liquid of the fragrance itself, and the soap's wrapper is highlighted with fine, iridescent glitter.

A historical note: when the waltz first gained popularity in genteel European society in late eighteenth and early nineteenth centuries, it was considered daring and even immoral. The coupled dancers held one another intimately in embrace-like poses, after all, rather than moving in line formations and merely touching hands. Newspaper editorials condemned the waltz's lascivious choreography, and none other than Lord Byron wrote a poem about the "voluptuous" new dance, noting its allowance of "hands promiscuously applied."

However, there's nothing scandalous or voluptuous about Tokyo Milk's Waltz fragrance, which is accurately described by the company as a composition of "linden, honeyed rose, wisteria petals, white musk." The linden is most evident in a soapy top note that lifts to reveal a heart of dewy pink rosebuds, and the soft muskiness is suggested more by the earthy sweetness of the wisteria than by any deep or animalic base notes. It's a blushing, springtime nosegay of a fragrance, youthful and innocent, but just polished enough for post-teen women to enjoy. Waltz is unexpectedly enduring on my skin, especially for a delicate floral. It should appeal to admirers of L'Artisan Parfumeur's Drôle de Rose (because of its honeyed roses) or Bond no. 9's Eau de Noho (because of its linden note).

The Waltz soap is a heavy, hefty bar, embossed with the letters of the alphabet, and it lathers and smooths the skin with shea butter and glycerin in a creamy, finely-milled base. Its Minuet 14 fragrance  is labeled simply as "white linden," but that's a bit misleading, because the green linden note is deepened by something subtly smoky that could very well be vetiver. Minuet 14 presents an almost-masculine counterpart to the liquid Waltz, as if the soap were a well-groomed dancing partner who might offer flowers and compliments to the ingenue personality of the perfume. And, when left unwrapped in a soap dish, it scents the whole bathroom. Not daring, perhaps, but definitely charming.

Tokyo Milk Waltz Parfum sells for $28 for 30 ml, and Waltz / Minuet 14 Perfumed Soap sells for $12 for an 8 oz bar. For buying information, see the listing for Tokyo Milk under Perfume Houses.