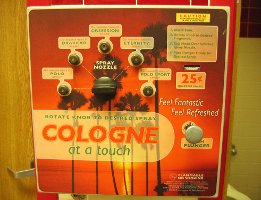 Perfume fanatics are seldom short on strong opinions. When confronted with a clean, sweet musk or a fruity floral, your average fragrance blog regular will enumerate the many reasons why such a scent could actually be considered an act of evil — and yet I still sense a frustration in between the lines of many comments, as if the writer would like to communicate entirely in caps, an Owen Meany of smell. When this same average commenter is confronted with a new cologne, however, there is an odd tendency to damn with faint praise. Some fragrance freaks seem to consider lighter, fresher, more straight-forward fragrances to be a little too easy. Summer weather sometimes forces us to resort to tonics, you see; as a perfumista, one should not publicly admit to wearing cologne without repeatedly referencing high temperatures or similar trying circumstances. Colognes are admired primarily for their effectiveness, rather than their beauty.

I do not deny a susceptibility to this type of thinking. Even though most of my favorite fragrances sit in the "Fresh" and "Crisp" categories of Michael Edward's scent classification system, I wince when a counter assistant descends on my spritzing and asks: "So, you're looking for something fresh?" It scandalizes me that this person does not instantly recognize I am a woman of rare taste and knowledge, a connoisseur not prone to indulge in whatever plebeian Eau de Calone he or she is thinking about selling me. Sometimes I haughtily report that I wear Dior Eau Fraîche or Eau de Guerlain, but department store salespeople most often cheerfully fail this appalling, snobbish test by offering me a sample of their summer flanker. I have a strong opinion on this flanker, which I keep to myself.

Occasionally you encounter a related, but less ridiculous approach to fresh fragrances, usually in a comment by someone whose online perfume mania is relatively new. This commenter gently puzzles that s/he doesn't "get" citrus fragrances. I remember feeling similarly when I started collecting niche samples and decants. Sampling leathers, incenses, chypres and synthetic, abstract wonders, I would sometimes add a cologne into the mix and find it wasn't lush enough, weird enough, long-lasting enough. Luckily, once I had gorged myself on the rich and strange, the need for a ray of scented sunshine returned. While I hope I can now start to admit my love for honest, simple, profound refreshment, I have decided to share with you a list of colognes* that need "getting". You never know when the weather might be unseasonably hot.

Annick Goutal Eau de Monsieur: The very well-executed and lasting citrus-oakmoss structure here is deliciously embellished with a dusty, almost raspy, savory-sweet immortelle. This is probably my favorite Annick Goutal fragrance and along with the feminine standouts from the brand, Passion and Heure Exquise, Eau de Monsieur makes clear what this line does best: relaxed, warm, natural-smelling scents with texturizing twists.

Rochas Eau de Rochas: I once read that this is a very popular scent with teenage girls in France. While I can't remember where I encountered this fact and have no way of verifying the truth of it, this just feels right to me. The balance of crisp, cheerfully forthright citrus and smoky, sensual patchouli creates an ageless quality that I imagine would suit young women in that curious stage of development which seems marked by silent, heavy-lidded, blasé self-confidence. Sometimes Eau de Rochas feels as much like a mood as a fragrance. Highly recommended for men as well as women, the world over.

Humiecki & Graef Eau Radieuse:  Like many of you, I got a laugh out of the over-the-top advertising copy from this German line. What is surprising is how perfumer Christophe Laudamiel has extended and brightened my laughter with Eau Radieuse. Humiecki & Graef calls it a "futuristic remake of an Eau de Cologne", a scent that will transport you to "a wondrous place on an unknown planet". For once, I can only applaud the accuracy of such a description. Even the note list — green banana, mandarin peel, lemon, Italian mint, rhubarb juice and bamboo sap accord — inspires an innocent delight in me. The talc-y fresh dry-down that Kevin noted in his review is extraordinary. I recently applied Eau Radieuse before a BBQ dinner, which I followed with four hours of sweaty, overcrowded rock concerting — and the scent lasted a lot better than I did. For a similarly spirited fragrance that is less otherworldly (and less expensive), you could try the nuclear Irish Spring of Thierry Mugler's Cologne.

Christian Dior Escale à Portofino: The most traditional and affordable cologne on my list, this is still likely to exceed the expectations of anyone who has been following the last few years of mainstream perfumery. Quiet, appetizing and very waxy, it reminds you that peel, zest and leaves are important parts of the citrus story. Portofino should appeal to fans of the re-released and extravagantly misnamed Extravagance d'Amarige (Givenchy).

DKNY Women: Bright, powdery and as head-clearing as ginger beer, DKNY Women felt to me like another of Donna Karan's scents doomed to noble commercial failure. For a while, it seemed to be available exclusively at the duty-free store.  Last month I found it at a local perfume shop that specializes in the discontinued and discounted. The knowledgeable sales assistant there had just sent a customer away with a bottle and told me it was one of their best sellers. "It's unique," he said.  "It's clean without reminding you of soap. People come across town looking for it." Maybe it should be added to Donna Karan's fabulous new collection of re-released fragrances.

* With this term, I am referring very generally to both scents in Eau de Cologne concentration and those Eaux de Toilette that use traditional cologne materials.

Note: image is spray-on cologne from a truck stop restroom in Gustine, CA [cropped] by graymalkn at flickr; some rights reserved.