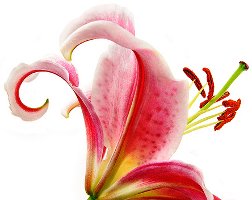 Last night in a fit of optimism, I packed my winter sweaters and heavy wool skirts into plastic tubs and hauled them to the basement. Out came the cotton dresses and print blouses. Naturally, this morning was chilly, and I see rain splashing into the birdbath outside my window as I write. It's the cold edge of spring. I want a perfume that is an antidote to the amber, leather, tobacco, and vanilla I've been wearing for months. I want something that hints at warm days to come and smells like the air outside: crisp, floral, and green. This is when I reach for Annick Goutal Des Lys Eau de Toilette.

A lily's fragrance is potent. This has advantages and disadvantages. The pure, thick scent of just one stem of Stargazer lilies on the mantel will steamroll over the odor of dank carpets or an overfull litter box. Within a minute of coming into a room, guests will say, "It smells good in here." At the same time, lilies can overtake a space, giving it the feel of funeral parlor and fighting with the smell of dinner in the other room. After an hour, guests may well ask for aspirin.

Another disadvantage of lily is that, like rose, it's immediately recognizable. When I'm too familiar with a scent, I tend to ignore it. I feel done with it, even though it still has plenty of beauty left to give. (This is one of the problems I have with Guerlain Shalimar and Yves Saint Laurent Opium, as much as I like them.)

Des Lys skips over both of these challenges. First, Des Lys is a light, fresh Eau de Toilette, more along the lines of Eau de Camille than Annick Goutal Passion or Songes. In fact, Des Lys has the refreshing, sheer feel of an Eau de Cologne.  I can imagine spraying it on at the height of summer when any scent heavier than a glass of iced tea nauseates, and Des Lys would still refresh. It has about the same lifespan as a classic Eau de Cologne, too. After a few hours, Des Lys is a bare, clean musky whisper of what it first was.

Next, Des Lys doesn't smell like the full, sweet lily I expect. Instead, it's dry and green with the barest hint of cassis and a wash of clean musk that lends a sheer soapiness. At least half of Des Lys is crushed stem and leaf, like the smell of a grass stain on linen. The rest is the distillation of a freshly opened lily plunged into ice water.

Annick Goutal Des Lys, created by perfumer Isabelle Doyen in collaboration with Camille Goutal, was released in 2003 as a limited edition, and while it's been reissued at least once, it's currently discontinued. It can be found fairly easily though, online and off. My bottle was a gift from a friend who bought it in a duty free shop.