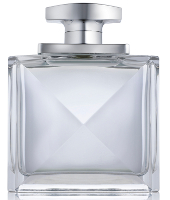 It's apt that a company named Nautica (a Coty brand) is releasing a water-based, "aquatic" perfume called Oceans; however, the big story is not the smell of Nautica Oceans, but the way the fragrance is made. Nautica Oceans uses a patent-pending micro-emulsion technology developed by perfumer Michel Mane (Mane USA) that "allows for a concentrated oil load of up to 20 percent to be built into water-based fragrances" (water-based scents usually only have 2-3 percent oil in the formulation).1 Nautica Oceans uses a 10 percent oil load and Nautica has exclusive use of the Mane technology for two years.

Nautica Oceans has impeccable green credentials: its ingredients and packaging are biodegradable (the fully recyclable outer carton is made from 30 percent post consumer recycled fibers and is produced with wind energy in a carbon neutral facility) and Nautica supports Oceana.2 (The only non-green aspect to Nautica Oceans is its two-year exclusive rights agreement with Mane — why not let as many perfumers and fragrance companies as possible use this "cleaner" perfume technology?)3

Nautica Oceans is yet another in a long line of aquatic sport fragrances.

Nautica Oceans opens with ozone and synthetic-smelling citrus notes and ends with the scents of light 'wood' and thin musk. Sandwiched between the predictable top and base of the scent is the interesting "Regatta Accord." This accord was developed using Mane USA's "Jungle Essence" headspace technology  — "an actual piece of a sail was distilled from the world's No. 1 racing yacht...this singular essence was replicated through perfumery and incorporated into the Regatta Accord."2 What I believe to be the "Regatta Accord" appears briefly and smells salty-sweet — like sea-water-saturated hemp ropes drying in the sun. Why didn't Nautica run with that Regatta Accord and weird-up the aroma of this otherwise innovative fragrance?

On my skin, Nautica Oceans lasts as long as alcohol-based fragrances; the juice looks thicker— almost the consistency of maple syrup. Oceans' water-based/alcohol-free formula may be easier on our bodies too (alcohol can dry out and irritate skin).

Nautica Oceans' bottle was inspired by a signal flag and its cap looks like a sailboat cleat. Nautica Oceans is available in 50 and 100 Eau de Toilette sprays ($65-$49) and assorted grooming products.