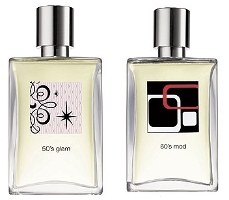 60's mod (shown above right) is a "bold and colourful declaration of peppered plum, violet leaf and sensual white woods."

Avon 50's glam and 60's mod are available in 50 ml Eau de Toilette. They can be found now in the UK, and will launch elsewhere later in the year. (quotes via avonshop.co.uk, additional information via cosmoty.de)