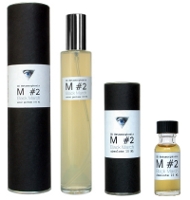 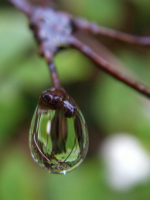 But I have seen his eyes, they are
As pretty and bright
As raindrops on black twigs
In March, and heard him say:

I am a breath
Of fresh air for you, a change
By and by.

Black March I call him
Because of his eyes
Being like March raindrops
On black twigs.

You can read the poem in its entirety at Memory and Desire. The Black March figure in the poem is generally presumed to be death, but in the early stages, at least, Black March (the perfume) smells very much alive: it's the scent of wet earth and wet wood in the early spring (the notes are listed as rain drops, leaf buds, wet twigs, tree sap, bark, mossy earth and the faintest hint of spring). The opening is fresh and clean; later, as Columbina points out at Perfume Smellin' Things, it gets darker and more somber. She likens the dry down to the smell of a freshly dug grave. Happily for me, it does not strike me as nearly so somber as that; even at its darkest (and it does get very earthy, more so the longer it's on skin) it stays closer to what March at Perfume Posse called the "smell of thawing soil, spring air and unfurled buds".

If Black March is too earthy for you, it layers beautifully with the very green and cedar-y CB 93 (from the Reinvention series, with notes of galbanum, bourbon geranium, holy basil, Siberian fir, scotch pine, Moroccan cedar, candlewood, frankincense and sandalwood), and actually, I'd recommend CB 93 in general as an excellent layering agent any time you have a scent that ought to be greener and woodier than it already is.

CB I Hate Perfume M #2 Black March is available in 15 ml Perfume Absolute (perfume oil) or 100 ml Water Perfume. The Water Perfume would, I'm guessing, be called an Eau de Toilette (or maybe an Eau de Parfum) if it were in an alcohol rather than a water base. It's lighter than the Perfume Absolute, and I tend to use it as a body spray. I prefer it to the Perfume Absolute only because I've never liked perfume oils, but it's entirely a matter of personal taste. I will also note that the Home Sprays are the exactly the same as the Water Perfumes but in an even lighter concentration, and they're slightly less expensive. I own Russian Caravan Tea in the Home Spray, and it works perfectly as a personal fragrance. Unfortunately, CB I Hate Perfume doesn't make a Home Spray in Black March at the moment.

For buying information, see the listing for CB I Hate Perfume under Perfume Houses.

Note: image at top right is Big Wet via ecstaticist at flickr; some rights reserved.

5 perfumes: April is the cruellest month
100 Fragrances Every Perfumista Should Try