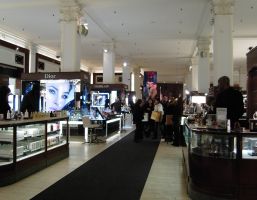 Saks Fifth Avenue's original store is located, naturally, at the heart of Fifth Avenue, and its proximity to St. Patrick's Cathedral and Rockefeller Center makes it a popular stop for out-of-town visitors. However, Saks manages to combine mass appeal with fashion-forward merchandise that also lures the locals into its eight ten-story flagship. Most of the first floor, where dark wood counters stand between the store's original, white-painted columns, is dedicated to fragrance and beauty products. Some typical "department-store" perfume brands are featured there; however, they're outnumbered by a myriad of high-end fragrance lines. Occasionally, an "exclusive" new release is also highlighted (Saks was the first store in the city to carry Flowerbomb, for example).

Some of the fragrance brands carried by Saks are grouped together at counters near the Fifth Avenue entrances, some are placed with their accompanying makeup lines, and others shine in mini-boutiques of their own. The sales assistance ranges from pleasantly knowledgeable about certain lines to strangely inaccurate (one recent shopper who expressed a liking for soft, rosy florals was offered a bottle of Lolita Lempicka to try). If you prefer to circulate and sniff on your own, the variety and sheer quantity of fragrance offerings promises a long, happy session of browsing.

Not to be missed: Saks' store-within-a-store enclaves for Chanel, Armani, and several other brands.