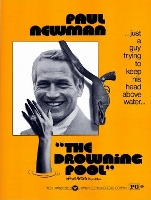 The building was pink stucco, big and new and ugly. It had a side entrance with "Romp Room" lettered above it in red neon...[I heard] The high titter of drunk and flattered women, the animal sounds of drunk and eager men. Babel with a wild jazz obbligato.

A big henna redhead in a shotsilk blouse was making drinks at a service bar near the door. Her torso jiggled in the blouse like a giant soft-boiled egg with the shell removed.*

The scent wafting off this dame was unmistakable: Coty Emeraude, in the bottle with the plastic lid. I bet she was saving up for Shalimar. Not that she should bother — the stink of cigarette smoke and bleach water bar rags would follow her wherever she went.

But who was this gorgeous dame down the bar? She was years away from drugstore perfume. At first glance, I'd peg her for Frédéric Malle Carnal Flower.

I stole a look at the woman, to confirm my first impression. Her atmosphere was like pure oxygen; if you breathed it deep it could make you dizzy and gay, or poison you. Her eyes were melancholy under heavy lashes, her cheeks faintly hollowed as if she had been feeding on her own beauty...Her hands fumbled with the diamond clasp of a gold lamé bag, and groped inside. "God damn and blast it," she said.*

Hmm. Beautiful — ethereal even — but with a potty mouth. Maybe she'd be better off wearing DelRae Amoureuse, a dream of heady, wet white flowers. One drop is heaven itself, but two drops will burn the hairs out of your nostrils. Her friend was an attractive dame, too, if a little older. Maybe her mother? Her eyes were particularly striking.

They were innocent eyes, not youthful but innocent, as if they perceived only pre-selected facts. Such eyes went with the carefully dyed blonde hair whipped like cream on her pretty skull, with the impossibly good figure under her too-youthful dress, and with the guileless way she let me look at her.**

"Ma'am," I said. "Is that Jean Patou Sublime you're wearing?" I already knew the answer. Sublime plays at being youthful, but no twenty-year old would be caught dead in it. I'd love to smell her in vintage Lanvin Arpège, or, if she wants to stick with Patou, Joy.

Without trying, I had succeeded in startling her. She stared at me with her mouth open. Then she remembered that it looked better closed, and closed it.**

All that opening and closing of mouths reminded me that I was hungry. I ordered a martini and a grilled cheese sandwich from the redhead and settled down to an early supper.

While I was eating, a woman came through the door at the end of the bar. She was tall and big boned, with more than flesh enough to cover her bones. The skirt of her cheap black suit was wrinkled where her hips and thighs bulged out. Her feet and ankles spilled over the tops of very tight black pumps. Her north end was decorated with a single gray fox, a double strand of imitation pearls approximately the same color, and enough paint to preserve a battleship. Her chest was like a battleship's prow, massive and sharp and uninviting. She gave me a long hard searchlight look, her heavy mouth held loose, all ready to smile.*

This dame was dressed for a conquest. Before she left the house she had drained a bottle of Thierry Mugler Angel, but it didn't even come close to matching her aggressive style. I might have suggested a finer cut of suit and a dab of Caron Tabac Blonde, but just then her smile turned to a scowl.

"Well, possibly," I said warily and put down my sandwich.

"Yes, you are. Thanks to you, I spent three hundred bucks on a bottle of Amouage Jubilation 25, and my boyfriend says I smell like I forgot to put on deodorant. If that's not bad enough, I spent a fortune hunting down a bottle of vintage Dioressence on eBay and it had gone bad." The fox hanging around her neck seemed to snarl along with her. She pushed up her sleeves and socked me on the jaw with a meaty fist.

When I woke up I was at the hospital. It was the middle of the night, and the halls were quiet. I had plenty of time to think about the people I had driven to buy unsniffed bottles or encouraged to try something that ended up being a total scrubber. Maybe it was time to hang up the laptop and call it a day. I could always go back to hostessing at the barbecue restaurant.

By the time the sun rose I had turned over a new leaf. Never again would I second guess someone's perfume or bore the patient readers of Now Smell This with my posts. I walked to the hospital's business office to check out.

The cashier at Mercy Hospital had eyes like calculators. She peered at me through the bars of her cage as if she was estimating my income, subtracting my expenses, and coming up with a balance in the red.

"How much am I worth?" I said cheerfully.

The dark scent of dry violets and old attic wafted from the cashier. "Jean Patou 1000?" I asked the dame. She probably bought it with money she'd skimmed from the till. "I think you'd like Bvlgari Black, too." I couldn't help myself.