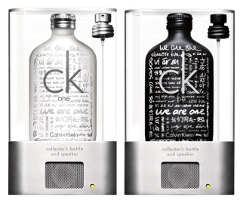 Calvin Klein will launch three limited edition fragrances for spring, two for CK One and one for CK Be:

CK One Summer 2009 (above left) ~ this year's summer limited edition of CK One, inspired by "an unencumbered summer day at the pool", will launch in March. The notes features blue mint, cucumber, limette, bergamot, water accord, green apple, rosemary, lotus blossom, rum cocktail, sandalwood, driftwood and sea moss. CK One Summer 2009 will be available in 100 ml Eau de Toilette. (via cosmoty.de) See also: CK One Electric 2006, CK One Summer 2007, CK One Summer 2008.

CK One & CK Be "we are one" (above right) ~ limited edition bottles of the iconic scents decorated with the words "we are one" written in various languages, slated to launch in February. In 250 ml body spray, or in a Collector Edition including a 100 ml Eau de Toilette and an MP3 player-compatible speaker to tie in with the idea of music as the universal language. (via sfilate.it, moodiereport)