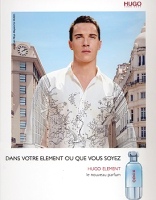 Hugo Boss will launch Hugo Element, a new fragrance that aspires to "upgrade the adolescent image of the Hugo brand", this coming February. The target is urban men, the bottle is meant to recall an oxygen tank, and the face for the fragrance will be actor Jonathan Rhys Meyers, who has fronted the Hugo by Hugo Boss scents since last year (you can see two of the TV spots here). The print and television advertising was shot on location in Buenos Aires.

Hugo Element is fresh woody aquatic fragrance with notes of coriander and ginger. (I'll update with more detailed notes when I can find them).

Hugo Boss Hugo Element will be available in 60 and 90 ml Eau de Toilette. (quote via cosmeticnews, additional information via vogue.com.au, osmoz) Update: in addition to coriander and ginger, Hugo Element features notes of calone and cedar. It will also be available in 40 ml and in matching grooming products. (via cosmoty.de) Update: you can see the Jonathan Rhys Meyers commercial here, and a review of Hugo Element here.

Ebba Los Angeles has launched By Sky, the third fragrance in the series that already includes By Sea and By Sand. By Sky is described as a "whimsical blend of Red Fig, Violet leaf and White Musk", and is available in Perfume Oil or Eau de Parfum spray. (via ebbalosangeles)