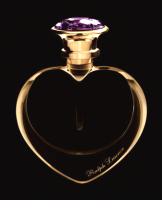 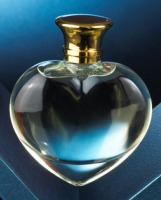 When I heard that Ralph Lauren was going to launch a new perfume in a jewel-studded bottle for some $2000+, I thought: why not — every other brand is jumping on the luxe bandwagon despite these tough economic times, why not Ralph Lauren? A week or so after I first heard about it, I spied a tester of something I didn't recognize hiding behind the tissue box on a Neiman Marcus perfume counter (always peek around the back, you never know what you'll find) and asked what it was. The sales associate told me it was to be the new Ralph Lauren, that it wouldn't launch until later in the year, and that it would be very expensive. She let me spray some on a card. I sniffed, giggled at the audacity of charging so very much for such a thing, and then promptly forgot all about it — easy enough, since Love, Ralph Lauren is not a particularly memorable fragrance.

Later, I realized that it wasn't really so expensive, or at least, it needn't be. The bottle at top left is the luxury limited edition, and it's $2200. It has a 47-carat amethyst in the 24-karat gold painted cap, and it comes with a lucite stand. If you want to blow some money but not quite that much, you can spend $600 and get a 15 ml bottle of the Parfum with a crystal in the cap, and you still get the lucite stand. If you're a real tightwad, you can get the plain bottle with the plain cap (the one shown at top right, although it doesn't look so enthralling in real life without the nice blue background), for $90 (50 ml Eau de Parfum) or $135 (100 ml); sorry, no lucite stand. There's supposedly also a smaller size for $75, but I haven't seen it yet.

What of the juice? It's meant to be an "extravagant floral oriental", and for anyone who missed the fragrance announcement on Now Smell This back in September, I'll repeat what Ralph Lauren had to say about Love:

What I most wanted was for the fragrance to have quality. I wanted it to have some longevity; for the experts to say, ‘This is really special.’ I wanted something that was not this year’s fragrance or the luxury of the moment. (via wmagazine)

He got his wish with the longevity factor; Love, Ralph Lauren lasts pretty much through the day. Whether any experts will find it special I cannot say, but this non-expert found it more serviceable than extravagant. The opening is sweet berry with added "fresh"; it does have some sparkle for a brief time (there's champagne accord in there, along with goji berry, cool green water accord, rose, magnolia, amber, iris, sandalwood, vanilla and patchouli) but there isn't anything special about it, nor does it smell like any extra investment was made in the materials. The dry down is that dark-but-scrubbed-clean ambery-patchouli-woods stuff that is already starting to bore me nearly as much as the ubiquitous fruity florals we've suffered through recently. The sweet fruit lingers through much of the proceedings, but more quietly as time passes; the florals are strong but vague.

Love, Ralph Lauren is fine if perhaps rather dull. I said about the same about Notorious, but actually I like Notorious considerably better than Love. I suppose there are women on earth who will be getting the luxury version of Love for Christmas, and I hope they like it better than I did.

Love, Ralph Lauren can be found at major department stores.