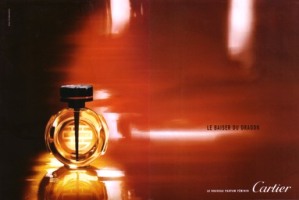 You know how there are people in your life that you can't really say you like — oh, maybe you did at one time, but not so much now — but you appreciate them? Maybe a person you otherwise had nothing in common with helped you out by incidentally imparting wisdom just when you needed it. Or you learned by example how not to do something. You don't really care to spend time with these people, but you're happy for what they've contributed to your life. This is how I feel about Cartier Le Baiser du Dragon.

When I first encountered Le Baiser du Dragon, I fell madly in love with it and bought first the Eau de Parfum and then the Parfum. Now it feels to me like an itchy fur coat on an August day — it swelters me. In the meantime, Le Baiser du Dragon taught me to avoid fragrances that overwhelm rather than enhance who I am, and it trained me to pay more attention to nuance. It also showed me that I adore a good patchouli. For these reasons, Le Baiser du Dragon is like an ex-husband that I meet on the street and am surprised that we ever had a life together. At the same time, I wouldn't be who I am without him.

Alberto Morillas created Le Baiser du Dragon for Cartier in 2003. Morillas knows how to put together both blockbusters (Kenzo Flower and Estée Lauder Pleasures) and rule breakers (Yves Saint Laurent M7 and S-Perfume Lust), and I can imagine Cartier eagerly handing him photos of their vaguely deco, Chinese-inspired line of Le Baiser du Dragon jewelry and asking him to make a perfume that reflected its aesthetic. Morillas handed back a perfume that is as solid and dark as the jewelry, but with little of its delicacy.

Cartier's website describes Le Baiser du Dragon as a fragrance that takes vetiver, which they deem as traditionally masculine, and gives it a feminine twist. It lists Le Baiser du Dragon as having top notes of amaretto accord, neroli blossom, and gardenia; a heart of iris, cedar, musk, and Bulgarian rose; and base of vetiver, patchouli, benzoin, and amber.

When I smell Le Baiser du Dragon, whatever vetiver might be there is overwhelmed by an aldehyde-boosted brew of sharp cedar, sandalwood, sweet almond, and gardenia. The Parfum shows more rose than the Eau de Parfum. Le Baiser du Dragon is warm, woody, sweet, and insistent. It sits on my skin rather than melding with it. It reminds me of a charming guest who bursts loudly into the party and needs to be part of everyone's conversation. At first, she's fun and knows all the best gossip. After half an hour, you're looking for the door. At the next party you simply wave at her from across the room. Both the Eau de Parfum and the Parfum last for hours and hours, and my favorite part of the perfume comes the morning after wearing it when most of what's left is a sexy patchouli.

Although I've long ago swapped away my bottles of Le Baiser du Dragon, from time to time I reach for the half dram of Parfum I kept behind. It's a nice reminder of how much my sense of smell, and even my sense of self, has evolved over the past five years.