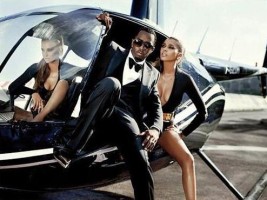 Men: Sean Combs thinks we’re all descended from kings and we can become kings of something if we constantly believe “I AM KING! I AM KING!” (presumably while wearing I Am King cologne). I’ve thought of myself as a king since birth but, with time running out, I have no kingdom, not even a measly duchy, to call my own.

I’ve heard Sean Combs’ music, seen his clothing line and even watched his reality show on TV for a few minutes here and there. Combs, like Donald Trump, is always talking about money and seems to believe his endorsement of any product gives that product “class.” Unlike Donald Trump who has participated in funny send-ups of his own image, Combs is serious — about himself and his “impact” on “culture.” For me, watching Combs for any length of time is not fun — it’s tedious; there’s nothing effortless and graceful about trying so hard to impress and dominate. (Just look at the I Am King print and video ads.)

But my attitude towards Combs softened somewhat when I first read the ingredients list for I Am King. Surely, even Combs cracked a smile, one hopes, at I Am King’s personally selected and quirky ingredients: cranberry, "a proprietary Imperial French berry note", premium Champagne-crème de cassis-kir royale, cooling Mediterranean water, key lime pie, and lemon cream. Other, more ordinary, notes include tangerine zest, orange, labdanum, cedarwood, vetiver, white moss (white musk?), and sandalwood. However, after smelling I Am King, I think either Combs is trying to fool us or has been fooled himself by Estée Lauder’s perfume team of Karyn Khoury, Trudi Loren and IFF because there’s certainly no discernable champagne (sparkle), labdanum (depth), crème de cassis (liquor-y richness) or sandalwood (any real wood) in this fragrance. 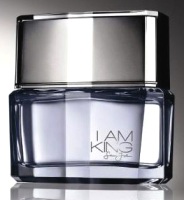 I Am King opens with sour citrus and a blast of sweet “berries” (nondescript, certainly not “Imperial French,” berries). As the berries buzz and bore into my nasal passages, a hazy musk appears, accompanied by mildly ozonic and lemon cheesecake notes. Then, everything becomes rather stale. Perhaps Combs gave I Am King’s creators a list of his favorite drinks and foods to include in the fragrance, and they said, “Of course! ANYTHING YOU SAY Mr. Combs!” and proceeded to concoct I Am King with a well-tried, over-tired formula of citrus-fruit/wood/musk. I Am King is not fancy or fun; if anything, it’s a mid-grade, boring sport fragrance — for young women. I hope when Sean John’s I Am Queen fragrance is released in 2009, it packs a punch — like real queens: think Maria Theresa, Divine, Latifah.

Though I Am King is a commoner in the realm of perfumery, Combs is a king when it comes to marketing and self promotion; first-year sales of I Am King are expected to exceed $100 million globally.

Sean John I Am King is available at Macy’s through the holidays and will go into broader general release in February of 2009; I Am King Eau de Toilette is $54-72; bath and body products are also available.