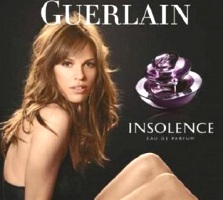 At the heart of Insolence: a new version of Insolence, for Eau de Parfum addicts. A fragrance more captivating than ever, concentrated on essentials.

A new orchestration of the Insolence olfactory structure, direct to the heart with intense violet and deep iris, on a carnal and intimate base.