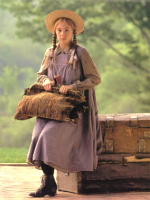 The first novel in the series, Anne of Green Gables, appeared 100 years ago, in 1908. According to Wikipedia, Montgomery "used a photograph of Evelyn Nesbit, clipped from an American magazine and pasted on the wall above her writing desk, as the model for Anne Shirley, the book's main character", but the editions I had as a child, printed by Grosset & Dunlap in the 1970s, featured photographs of a pretty freckled red-head on the dust jackets, and whoever that woman is, she has always been Anne Shirley to me (even after the wonderful mini-series starring Megan Follows appeared in the 1980s; see image at right).

So. I don't expect that Anne has quite so many fans as Lizzy Bennet or Hermione Granger, but for those of you that qualify, scent anyone at all from the series.

I decided for no reason to put everyone in Guerlain. Anne, of course, needs something feisty but romantic, so I've given her Chamade. For Diana, the old-fashioned but romantic Après L’Ondée. I can't picture Gilbert wearing fragrance at all, so perhaps just a splash of Eau de Guerlain?

Extra points for anyone who can remember if fragrance is ever mentioned in any of the novels?

And extra reading: Margaret Atwood on Anne of Green Gables.