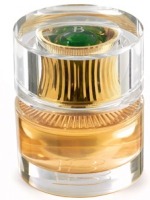 The new woody floral scent was developed by perfumer Ursula Wandel, who noted that...

There are about 20 natural products in B. Today, it’s rare to have as many natural ingredients, since the price doesn’t allow for it.

B de Boucheron will be available in 15 ml Parfum; 30, 50 and 100 ml Eau de Parfum and in matching body products. (quote via wwd, additional information via bellemania.de) Update: see a review of B de Boucheron.