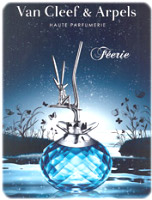 The scent will be a woody floral with violet developed by perfumer Antoine Maisondieu.

Féerie is aimed at the luxury market and will be priced higher than other fragrances in the Van Cleef & Arpels line. The bottle features "a tall sculpture in zamac of a fairy on a branch". It will be exclusive to Neiman Marcus in the United States, and will be available in 50 and 100 ml. (via cosmeticnews) Update: the notes for Féerie include violet, red berries, mandarin, rose, jasmine, iris and vetiver; the bottle was inspired by Van Cleef & Arpels' A Midsummer Night's Dream jewelry collection. (via neimanmarcus) Another update: see a review of Van Cleef & Arpels Féerie.

As previously reported, we're expecting the launch of John Galliano's "DNA in scent form" later this year. A few more details: the fragrance will launch in October but will not reach the United States until 2009.

The fragrance is described as "sweet, light and floral" and the notes include rose, lavender, bergamot, violet and amber. (via wwd, vogue.co.uk)

Update: the John Galliano signature fragrance will be a modern floral aldehydic scent developed by perfumers Christine Nagel and Aurélien Guichard, and is intended as “an olfactory voyage of [Galliano's] ideal girl”. The "official" notes, so far, include rose, peony, iris, violet, patchouli, amber. It will be available in 40, 60 and 90 ml Eau de Parfum and in matching body products; look for it in September at Harrods. (via wwd, cosmeticnews)