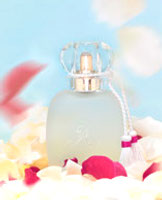 The presence of a pure and modern rose. Only by enhancing the quantity of rose essence in the composition could this effect be obtained. Only the highest quality of the essence of Bulgarian rose could make it succeed.

Because a true essence of rose is harmonious from beginning to end, no synthetic rose can be found in Zéphir de Rose. Just a pure magnificent rose essence with no embellishment which could have created confusion.

[...] Zephyr was traditionally the west wind, the wind of Love in the Greek and Latin mythology.

Can this delicious wind be captured in a bottle? Yes! But only for a little while, let’s release this captivating scent as soon as possible!