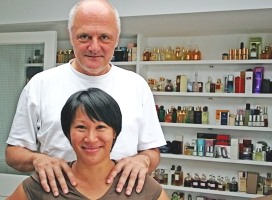 As I said on Friday, Perfumes: The Guide by Luca Turin and Tania Sanchez is due to ship from Amazon on 4/10 (list price: $27.95, today's Amazon price: $18.45). The hardcover version is 400 pages and includes introductory material plus reviews of over 1200 fragrances. According to Penguin, the book will "do for fragrance what Robert Parker’s books have done for wine".

Many of you have pre-ordered the book, or at least read about it (if you missed the review in the New Yorker, do take a peek), and all of you can skip to the second-to-last paragraph for instructions on how to add your questions to our group interview. Those of you who need some further introduction, read on.

Luca Turin is described at Wikipedia as "a biophysicist with a long-standing interest in the sense of smell, the art of perfume, and the fragrance industry". He became known to wider perfumanity first through his Parfums: Le guide, published in French in 1992 and 1994 (you can find a .pdf of the 1994 edition here), and later with the 2003 publication of Chandler Burr's book, The Emperor of Scent. For more background, see an interview with Luca Turin and a review of his last book, The Secret of Scent. Here is Luca Turin on New York by Parfums de Nicolaï (awarded 5 stars), from Perfumes: The Guide:

If Guerlain had any sense they would buy Parfums de Nicolaï, add her range to theirs, trash fifteen or so of their own laggard fragrances, a couple of de Nicolaï's, and install owner-creator Patricia in Orphin as in-house perfumer. She is, after all, a granddaughter of Pierre Guerlain and genetic analysis might usefully reveal the genes associated with her perfumery talent. As a control where the genes are known to be absent, use the DNA of whoever did Creed's Love in White. Smelling New York as I write this, eighteen years after its release, is like meeting an old high-school teacher that had a decisive influence on my life: I may have moved on, but everything it taught me is still there, still precious, and wonderful to revisit. New York's exquisite balance between resinous orange, powdery vanilla and salubrious woods shimmers from moment to moment, always comfortable but never slack, always present but never loud. It is one of the greatest masculines ever, and probably the one I would save if the house burned down. Reader, I wore it for a decade.

Tania Sanchez is a writer and editor with a "near pathological interest in perfume". Her story “Venus in the Musée de l’Homme” was nominated for the Pushcart Prize in 2006. She met Turin through his now defunct blog, Perfume Notes, and subsequently helped with the editing of The Secret of Scent. Some of you may know her as Brooklyntbone on the fragrance forum at MakeupAlley. Here is Tania Sanchez on L'Air du Désert Marocain by Tauer Perfumes (awarded 5 stars), from Perfumes: The Guide:

The sweet smell of amber, the foundation of the classic perfume oriental, has long been weighed down with vanilla and sandalwood, decorated with mulling spices, bolstered with musk, made come-hither, ready for its close-up, and we are quite used to it—but this is not amber's first life. Perfume meant first "through smoke," named for fragrant materials burned to clean the air and therefore the spirit. If, as Carlos Santana claimed in his Grammy acceptance speech, the angel Metatron delivers messages to the world via rock guitarists, it only makes sense that the as yet unnamed angel of perfume speaks through an unassuming Swiss chemist from Zurich with a mustache and a buttoned shirt. L'Air du Désert is talented amateur perfumer Andy Tauer's second fragrance, after the rich oriental rose of Maroc pour Elle. One hale breath of Désert's vast spaces clears the head of all the world's nonsense. There is something about the ancient smell of these resins (styrax, frankincense) that on first inhalation strikes even this suburban American Protestant with no memories of mass as entirely holy, beautiful, purifying, lit without shadow from all sides. Even without the fragrance's name to prompt me, I would still feel the same peace when smelling it that I've felt only once before, when driving across the southwestern desert one morning: all quiet, no human habitation for miles, the upturned bowl of the heavens infinitely high above, and the sage and occasional quail clutching close to the dun earth. Each solitary object stood supersaturated with itself, full to the brim, sure to spill over if subjected to the slightest nudge. Wear this fragrance and feel the cloudless sky rush far away above you.

So, Luca and Tania have agreed to answer our questions about perfume and their upcoming book. Please think of this as a group interview project — you can ask your questions in the comments below, and then I'll compile them and send them off and when I get the answers back I'll post them in a new article. I can't swear they'll answer all our questions (perhaps we'll have to see how many we get) but I'm sure they'll do their best. I'll leave the comments open until whatever time I get up (and remember) on Wednesday morning, then I'll shut off the commenting feature for this article.

Meanwhile, I'm sure many of you will have no problem dishing out the $18.45 for the hardcover. The real question is: what is the book really going to cost you? While you're thinking up your brilliant question for the Q & A, do tell us: 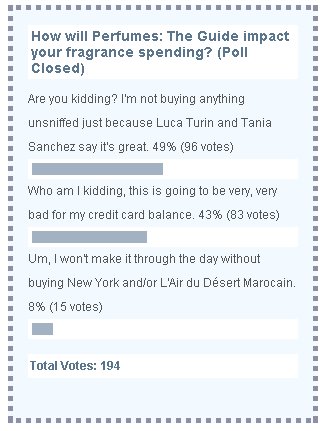 Update: you can find part 2 (the answers!) here.