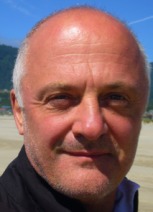 Luca Turin fans will be happy to hear that his next book, Perfumes: The Guide, is due out from Viking in April 2008. The book will be co-authored with Tania Sanchez, and promises to...

...include reviews of more than 1,200 fragrances, from "Undoubted Masterpieces" to the "Monumentally Awful." (via publishersweekly)

The Guide will feature all-new material (it is not an English translation of Turin's out-of-print Parfums: le Guide) and will be sized to allow readers to carry it along with them while shopping for perfume.

For background on Luca Turin, see an interview with Luca Turin, a review of his last book, The Secret of Scent, and a review of Chandler Burr's book about Turin, The Emperor of Scent.

Tania Sanchez is a writer and editor in New York with a "near pathological interest in perfume". She met Turin through his now defunct blog, Perfume Notes, and subsequently helped with the editing of The Secret of Scent. Some of you may know her as Brooklyntbone on the fragrance forum at MakeupAlley.