I’m a fan of the two original Bijan fragrances (Bijan Men and Bijan Women). When they were first released, those perfumes were sold at Bijan’s own shop in Beverly Hills and at “prestigious” department stores like Bullocks Wilshire in Los Angeles. These days, I’m not sure if Bijan perfumes are sold anywhere but at his store and discount perfume shops. Bijan prides himself on the exclusivity and high quality of the products he sells, and I’m sure Bijan has smelled and worn some great fragrances over the years, so it’s a shock that the most recent (2007) Bijan release, Nude for Men, smells so bad and is of such low quality. Either Bijan has lost his sense of smell or (as I suspect) he has zero input on the cosmetics that bear his name. Five Star Fragrance Co. (the perfume manufacturer and distributor known for such ‘classics’ as GALORE and ROYAL SECRET) makes Bijan Nude, and as of this writing, their website is non-operational. I believe Bijan Nude was created specifically for the discount market — the perfume equivalent of a new movie bypassing theatrical release and going straight to DVD.

Why did I buy Bijan Nude for Men…unsniffed? Last winter as I perused the always-hilarious Men’s Health magazine (how many more articles can be written about “finding a woman’s G-spot,” “driving her crazy in bed,” “keeping her satisfied”?), I saw the rather soft-focus, soft-core-ish ad for Bijan Nude: a man and woman, groomed to within an inch of their lives, face the camera, nude — caught in the act? (From the woman’s expression, I doubt the G-spot was detected.) I laughed at the ad and then read the list of ingredients for the men’s Nude fragrance: herbaceous greens, citrus fruits, gardenia, precious woods, amber and musk. Can you perfumistas and, especially, you perfumistos guess the note that intrigued me most from that list? Yes: gardenia — in a MAN’S cologne! How could I ignore that? I found a 50 ml bottle of Nude for Men for $19.95 online, ordered it, and waited, hoping some of the deliciousness of original Bijan Men would be in the Nude bottle. 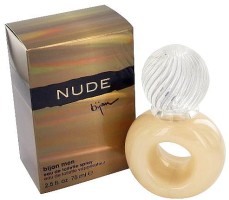 When Nude arrived at my house, as I often do with unsniffed purchases, I waited a few weeks before opening the bottle — fearful I had made yet another perfume mistake. Nude’s packaging is not cheap looking, but I find the flesh-colored bottle rather unattractive — it needs a tan (Bijan should know this). As I sprayed on Nude for the first time, I wondered if I had a defective bottle filled with distilled water and alcohol. Is this what “Nude” meant — like wearing nothing at all? Gradually, the scent emerged — a green, watery citrus aroma. I remembered the list of Nude’s ingredients and realized there was a REASON for the lack of specificity of those fragrance notes (herbaceous greens, citrus fruits, precious woods) — the generic notes had no character and must have been the least expensive in their categories: GREEN NOTES, CITRUS, WOODS.

I thought: “Twenty bucks down the drain. It could have been worse.” Over the next week, I wore Nude on many occasions, hoping for a miracle. I sprayed Nude on friends. On several people, Nude smelled of unripe lemons. On one person it simply smelled sharp and “green.” On myself and another friend Nude produced a distinct chemical aroma in mid-development that reminded me of the scent of a beauty parlor where the air is filled with the odors of hairspray and of the products used to bleach, perm, and straighten hair. Could Nude get any worse? And what of Temptress Gardenia? There is a bland floral note in Nude’s mid-development too; I believe it and the citrus produce the “ammonia/chemical” accord (or discord). My personal tester/partner said of Nude for Men: “It smells girly.” (And he wears Frederic Malle Carnal Flower!)

I was sad about the “state” of Nude; if great ingredients had been used it would have been a pleasant summer scent, but even in its present state it smells much better when layered with lavender Eau de Cologne. When I was about to place Nude on my air freshener/perfume demotion shelf, a miracle did happen. A few days ago, I sprayed some Nude on the backs of my hands and on my arms and then rubbed on some unscented lotion. The lotion hid (or devoured) the green-lemon-chemical notes and it activated the light, summery musk in Nude’s base; my hands smelled good…so good that I scented my bottle of lotion with some Nude.

Bijan Nude for Men is available in 50 and 75 ml Eau de Toilette. It can be easily found at online discounters; the price of a 75 ml bottle averages $32.