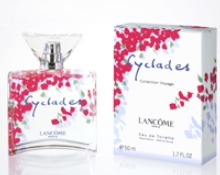 Cyclades is the third entry in Lancôme's Collection Voyage, the series of "dream destination" scents which started with Tropiques in 2006 and continued last year with Benghal. Cyclades celebrates the Greek islands of the same name, and is designed to...

The Cyclades juice is a musky floral, opening on notes of neroli and bergamot essence, leading to a heart composed of oleander and jasmine. The base is a blend of white musk and vanilla hyperabsolute.

Lancôme Cyclades launches in travel retail next month, and will be available in 50 ml Eau de Toilette. (via moodiereport)