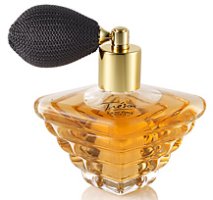 A new intensity – Trésor Elixir captures the finest attributes of the original, amplifying its roundness and richness in a fragrant new interpretation.

Trésor Elixir is a woody fruity floriental, created for a woman who is lively and romantic, modern and contemporary – a woman who wants to capture treasured moments with intensity.

Like Trésor, Trésor Elixir is based on Otto rose, with peach accents. According to Osmoz, the new Trésor Elixir is "...sweeter and fuller-bodied, with woodsy, almost leather-like accents and a balmier trail (honey rose, vanilla absolute, heliotrope, sandalwood)".