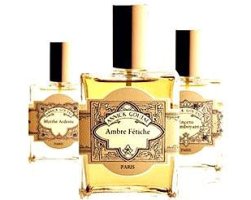 Isabelle Doyen and Camille Goutal were inspired by beauty rituals of the harem to create Annick Goutal Les Orientalistes — a trio of scents (Ambre Fétiche, Myrrhe Ardente and Encens Flamboyant) released at the end of 2007. I think it’s time to enact a moratorium on evoking the past in perfume advertising and promotion, since most ad executives and copywriters apparently skipped history classes. Perhaps the young women of the harem enjoyed their beauty rituals; I sincerely hope, in some small way, the costly items in their toiletry cases and incense boxes made up for the fact they had (most likely) been kidnapped, enslaved and separated from their families forever. Oh yes, there were also those pesky eunuchs and the sultan’s controlling mother to contend with, not to mention stress-inducing rivalries between concubines that sometimes led to murder — or banishment from the harem (which usually resulted in a life of poverty).

I’m wiping all thoughts of “the harem” from my mind and enjoying Les Orientalistes as fragrances that pay homage to the art of perfumery in the Middle East.

Ambre Fétiche includes notes of frankincense, labdanum, styrax, benzoin, iris, vanilla and leather. Ambre Fétiche starts out syrupy, dense and a bit medicinal; I smell a creamy candy note, styrax and benzoin. Ambre Fétiche’s sweetness overwhelms me, but I expect that is as it should be; the amber formulations I’ve smelled from Egypt and Morocco are not dry — or ‘shy’. As the fragrance develops, Ambre Fétiche’s ‘syrup’ begins to crystallize and I smell a bouquet of resins sprinkled liberally with vanilla beans. Labdanum and leather notes rouse this rather dreamy fragrance and there is a touch of muskiness too, but not enough to “dirty” the perfume. I certainly don’t have an amber fetish (I only wear one amber perfume: Serge Lutens Ambre Sultan), but after smelling Ambre Fétiche, I can imagine some amber fiend scenting his stock of sugar with amber and making amber cookies, amber nougat, or brewing amber-infused tea and Turkish coffee. Ambre Fétiche has excellent lasting power and maintains its voluptuous character till you wash it off.

Myrrhe Ardente contains both myrrh essence and synthetic myrrh resinoid, beeswax, guaiac wood, tonka bean and benzoin. Right out of the bottle, Myrrhe Ardente smells like a black cherry extract or liqueur; next, one smells rosy myrrh with ‘background’ benzoin and tonka bean notes. During the course of the fragrance’s development, I smelled a smoky honey accord, which I assume is the beeswax note. My favorite myrrh fragrance is Diptyque L’Eau Trois, a ‘hard’ and rough myrrh perfume. Myrrhe Ardente offers a well-mannered, soft and wispy alternative to L’Eau Trois. One day as I was testing Myrrhe Ardente, I drank a cup of hot chocolate; suddenly I was surrounded by a wonderful aroma — it was the myrrh and vanilla notes of Myrrhe Ardente mixing with the vapors of cream and dark chocolate rising from my cup. Has anyone created a scent using chocolate and myrrh accords? If not, they should. At the end of its development, Myrrhe Ardente smells comforting: a pleasant mix of vanilla, benzoin and myrrh with an incense ash note (this being Annick Goutal, the ash/smoke accord is refined, not harsh). As I wore Myrrhe Ardente, I kept thinking: “I’ve smelled this before…but WHERE?!” Finally it dawned on me: Myrrhe Ardente smells similar to Papier d’Arménie. Myrrhe Ardente’s lasting power is good and the fragrance stays close to the body.

Composed of frankincense essence and resinoid, “vieille église” frankincense, black and pink pepper, cardamom, nutmeg, fir balsam, and mastic, Encens Flamboyant seemed poised to win my Best of Les Orientalistes Award. Encens Flamboyant begins with sparkling fir balsam and frankincense, then, for a brief moment, Encens Flamboyant’s frankincense turns cloudy and smoky, and black pepper flecks the fragrance’s gums and balsams. On my skin, Encens Flamboyant is the least sweet of Les Orientalistes, but what sweetness there is seems to be produced by the spices: nutmeg especially. I chewed a mastic “tear” as I wore Encens Flamboyant (I’m not being too pretentious here; I have lots of mastic tears in the kitchen waiting to be used in a Turkish chicken recipe!) and that note is discernable in the fragrance if you really pay attention. Encens Flamboyant’s ‘old church’ accord makes itself known very early — imagine the smell of church vestments and tapestries scented with candle smoke and incense — but disappears quickly. Encens Flamboyant starts off bright, becomes smokier, mustier for only minutes, and then returns to the scent of fresh fir balsam. I got enthusiastic reactions from people when they smelled Encens Flamboyant — several people said I smelled like a “pine forest” or “pine tree.” I prefer those images to ones of harem concubines, anointing themselves with perfume and lighting incense — all dressed up with no place to go.

As I dabbed myself with my samples of Les Orientalistes, I thought Myrrhe Ardente was OK, Ambre Fétiche was good (if too sweet for my tastes) and Encens Flamboyant was wonderful. Then I decided to douse myself with these fragrances and give each perfume a 24-hour solo testing. When applied lavishly (and worn with aplomb — in the style of the Middle East), my opinions of Les Orientalistes changed drastically. Encens Flamboyant breezed through its interesting stages of development and smelled mainly of fir balsam; its unvarying presence began to annoy me (I’d love the scent in soap or room spray form). After 10 sprays, Myrrhe Ardente revealed its subtleties, its delicate mix of sweetness and smoke; to me it was the most evocative of the Middle East and the most incense-y of Les Orientalistes. Ambre Fétiche smells complex, luxurious and it ‘pulsates’ on my skin; it became my favorite.

Les Orientalistes are perfect for layering — with each other or with perfumes that highlight a particular ingredient in Les Orientalistes. Try layering Myrrhe Ardente with Serge Lutens Miel de Bois or L’Artisan Parfumeur Vanilia; dilute the sweetness of Ambre Fétiche by combining it with Serge Lutens Gris Clair, Eau d’Hermès, or Santa Maria Novella Iris; and add more (frank)incense to Encens Flamboyant with Tauer Perfumes Incense extrême.

Les Orientalistes fragrances are Eau de Parfum strength and come in 100 ml spray bottles. A fourth scent, Musk, will reportedly join Les Orientalistes’ line-up on Valentine’s Day 2008. I can’t wait to smell how Isabelle Doyen and Camille Goutal will tackle musk, can you?

For buying information, see the listing for Annick Goutal under Perfume Houses. As of this writing, I don't think the trio has arrived in the United States yet.