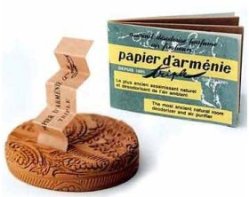 In the late 1800s, Auguste Ponsot, a Frenchman, traveled through Armenia and noticed that many people fragranced and disinfected their homes and businesses by burning benzoin (a resin produced by trees of the genus Styrax). Personal and public hygiene were hot topics at the time in France, and Ponsot felt Europeans, too, could benefit from burning benzoin at home. Realizing most 'modern' European families would not go to the trouble of burning raw benzoin, he sought the help of a pharmacist, Henri Rivier, to come up with an easy way to burn the resin.

Rivier dissolved raw benzoin in 90% alcohol, added some "secret" aromatics to the mixture, and soaked paper in the sweetly scented liquid. The paper was put through a saline bath to make it burn slowly. This fragrant paper was then burned and its smoke scented and cleansed the air. The new product was called Papier d’Arménie and became popular immediately. It has been produced for over 120 years in the Paris suburb of Montrouge.

Benzoin is a perfume fixative that smells of vanilla; it possesses a sweet powdery scent that I find addictive. In the medical realm, benzoin has been used to alleviate depression, as an expectorant, and, most importantly for the Armenians and Ponsot, as an antiseptic and disinfectant.

I possess a small bag of raw benzoin, so I decided to recreate Ponsot’s "eureka moment" — to revisit his inspiration. As I burned raw benzoin, a slightly medicinal sweetness filled the air. Slowly, a vanilla scent, smoky and rich, began to emerge. The softest 'wood' notes imaginable came at the end of the burn. One half hour after burning raw benzoin, the house smelled soapy-powdery-lovely.

The next day, I burned Papier d’Arménie. (The scented paper smells delicious and a sheet of the paper could be used to scent a small box, trunk, dresser, etc.) Following Papier d’Arménie’s instructions, I folded (accordion style) a strip of the paper, set it on fire and quickly blew out the flame. The burn lasted all of two minutes and was smoky. (As self-appointed "tester" and natural-born rebel, I burned a strip of Papier d’Arménie without folding it; the burn was uneven, but, again, in two minutes the strip was reduced to ash.)

The scent of burning Papier d’Arménie is of harsh and rough incense. I sniffed the smoke up close and felt my nostrils had been chemically seared. (Next time I feel a cold coming on, I’ll attack the germs by inhaling some Papier d’Arménie smoke!) I left the tiny room where the burning took place and came back every 15 minutes or so and the scent of Papier d’Arménie was evident for a few hours. The after-burn aroma is pleasant (light vanilla with a touch of amber, incense), but not as silky and powdery as the after-burn perfume of raw benzoin. When I burned Papier d’Arménie in a large room, its effects were not so apparent or long-lasting.

Burning Papier d’Arménie supposedly removes foul cooking and pet odors from the air. Unless the cooking odors you deal with most are burnt toast and boiled eggs, Papier d’Arménie won’t be of much use. It was helpless when faced with the heavy-duty smells of crab cakes and salmon, garlic-rich foods, and curries.

On the pet front: I waited till the "deed most foul" was performed in the litter pan, cleaned the pan quickly (holding my breath), and then burned one Papier d’Arménie near the scene of the crime. Surprise! I was shocked and ever so thankful that Papier d’Arménie DID clean and freshen the air. The room was inhabitable almost immediately. A feat! (I think I’ve found "my" use for Papier d’Arménie, which brings us back to its original reason for being: hygiene/disinfection.)

Papier d’Arménie is available at beautyhabit and many other Internet shops, including French Soaps on Amazon (the source of the picture shown above). The price for one booklet, containing 36 paper strips, is $6. See the Papier d’Arménie website for further information.