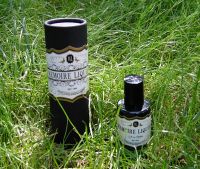 Henri Bendel in New York now houses the second existing Memoire Liquide counter, following the original location at Fred Segal in Santa Monica, California. Memoire Liquide is the creation of Robin Coe Hutshing, the founder of beauty-mecca Studio at Fred Segal, and her sister Jennifer Coe Bakewell. The company is an updated interpretation of a traditional apothecary offering “bespoke,” or custom-made, fragrances, and its written statement invokes Proust’s famous madeleine as the classic motif of “the intertwining nature of scent and memory.” Just as memories are intrinsically personal, these fragrances may be mixed and matched to fit the wearer’s own history, tastes, and imagination. 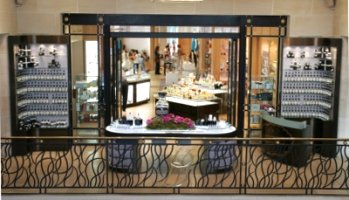 I wandered around the table for a while, following my own preferences and concentrating more on the floral-gourmand end of the spectrum. A few scents that intrigued me were Violette Glacée (green topnotes over a drydown of sweet, anisey violet), Café Royal (coffee and bittersweet chocolate), and Lune de Miel (honey with soft florals). The Memoire Liquide specialist also helped me branch out slightly by introducing me to some of his favorite oils from the other end of the table, where the woods and musks stand. A few of his suggestions were Bois Sec, a mix of cedar, sandalwood, and incense that can also give an earthy base to blends of rose or white florals; Nudité Absolue, a popular “skin scent” choice; and Daim Blanc, a smooth, sueded leather note that he merged into a surprisingly wearable combination with the juicy strawberry of Frais Sauvage. Still a floral-lover to the core, I was drawn more to Perle Lustrée, a soft, white musk garlanded with delicate notes of lilac, lily of the valley, and vanilla.

I had approached the Memoire Liquide counter with a specific idea in mind, which I finally revealed to the specialist: I wanted to recreate the scent of the bouquet that I carried at my wedding in May. (Yes, it’s a sentimental cliché, but please bear with me!) After a few minutes of smelling and comparing various scents, I was able to select three oils that matched the bouquet’s main “ingredients” in my mind. The Memoire Liquide specialist assisted me by placing them on paper blotters, drop by precious drop: we combined the oils in three different ratios, adjusting the proportions of the various notes. After sniffing the blotters, I tried the three alternatives on my own skin. Once I had decided which combination I liked the most, the specialist decanted the oils and blended them into a small black bottle with a cream-and-gilt label. My memory had been captured in liquid form; the line’s namesake concept was successful. My “recipe” has even been filed away by Memoire Liquide for my future reference and later purchases.

Two further thoughts occurred to me while I was browsing the Memoire Liquide department. For one thing, although I was confronted by so many scents, their identical packaging and their brief descriptions freed me to form my own impressions and associations. Esprit de Cassis, a potion of cassis, plum, black cherry, red currant, and musk, brought back the sensation of drinking Kir Royals in SoHo with an old friend one summer evening; Voile de Soie, a powdery blend of rose, jasmine, ylang-ylang, and lily of the valley over white musk, suddenly conjured up the memory of a perfume that my youngest aunt used to wear in the 1970s.

I also realized that the scent groupings allowed me to isolate and re-experience notes that have bored me lately by appearing in too many mainstream fragrances. One oil in the Encens, Bois et Épices group, Grain de Poivre, reminded me how effectively pink pepper can bridge the spicy and the sweet, and a handful of different vanilla scents — Vanille Moirée, with its base of orris root and benzoin, was a standout for me — ranged from meringue-light to mouth-wateringly rich.

Overall, the Memoire Liquide counter offers near-endless possibilities for a fragrance lover who already has a fairly well-defined idea of his or her own favorite notes and olfactory inclinations. If you are planning a visit to Memoire Liquide, allow yourself plenty of time to browse through the printed checklist of scents, to breathe from the various bottles, and to reflect on single and paired notes as they evolve on blotters and on skin.

Memoire Liquide’s website is still being constructed, but it will eventually offer a complete list of scents and further information about the company. Meanwhile, you can read more about the prices and products available here.