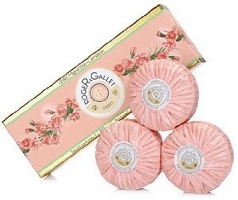 Rereading Robin’s recent reviews of carnation fragrances, I was inspired finally to open the bar of Roger & Gallet Carnation soap that has been resting on my bathroom shelf for a while. Carnation is one of my favorite notes in perfumes, second only to rose, and I have just started to explore carnation-scented body products to accompany some of my fragrances.

The Roger & Gallet website is full of information about the company and its products, including a history of the company (which dates back to the Napoleonic era) and a lively feature on its perfumed soaps. In 1879, Roger & Gallet released a lavender-scented soap in an innovative round shape: until then, they claim, commercial soaps had only been produced in squares and rectangles. These circular luxuries became trademark products for Roger & Gallet, and the company still takes pride in the quality of its soap. According to the website, the soap’s vegetal base is manufactured by a “traditional cauldron method” and is “core-fragranced” with essential oils. Each finished soap looks like a gift, wrapped in pleated paper and sealed with a decorative paper ring bearing the company seal, which almost seems a shame to open.

However, the Carnation soap itself is worth breaking that banded seal to use. It satisfies expectations on all counts: a thick, smooth lather, a long lifespan, and a strong, durable fragrance. Each heavy, three-and-a-half ounce bar is saturated with the scent of the spicy, fringe-petaled carnation, emphasizing the peppery side of the flower’s personality. This soap would be a suitable companion product to any high-quality carnation perfume, although it bears more resemblance to bolder fragrances such Lorenzo Villoresi Garofano (or even JAR Golconda, if you’re fortunate enough to own the latter) rather than the ladylike Bellodgia or the flirtatious, creamy Malmaison.

I’ve just realized that Roger & Gallet’s Carnation soap is a complete contrast to the natural, minimalist COPA Soaps that I reviewed a few weeks ago: it is richly perfumed, elaborately packaged, and steeped in tradition. I appreciate both approaches, when they are executed so well.

Roger & Gallet Carnation soap sells for approximately $7.00 for a single bar in a travel case or $16 for a coffret of three bars. For buying information, see the listing for Roger & Gallet under Perfume Houses.