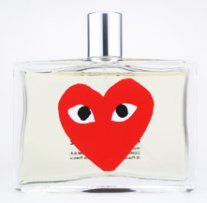 The concept of the Comme des Garcons PLAY line is design by not designing. It is a collection of basic items based on original forms or prototypes. PLAY items are characterised by the iconic red heart logo designed by Filip Pagowski, a New York-based artist from Poland. (via slamhype)

...the proof is in the perfume. A blend of bitter orange and saffron should guarantee that it fares better than previous offering Odeour53 [sic], an oddly-titled blend of 53 scents that didn’t score many points and was soon withdrawn*. But knowing Comme des Garcons, this might well have been intentional.

*Note: Odeur 53, so far as I know, has not been discontinued.