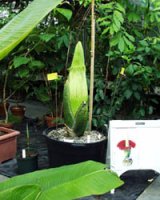 The University of Connecticut EEB Greenhouse has a Titan Arum (aka Corpse Flower) expected to bloom shortly, possibly as soon as next Monday:

It's a little hard to understand the appeal of the rare plant from the Indonesian island of Sumatra, aptly named Amorphophallus Titanum, with its putrid smell and its giant cone-like bud hugged by ruffled lettuce-like leaves. But there's something about its freakish nature that attracts curiosity and wonder.

When the plant first bloomed at UConn in 2004, more than 20,000 people made the pilgrimage to the university's greenhouse on North Eagleville Road.

Other corpse flower news: there is a plant expected to bloom soon at the Gustavus Adolphus College Biology Department’s greenhouse in Minnesota, and another recently bloomed at Roseville High School in Roseville, California. Kew Gardens had a blooming Titan Arun in April.

More on the fragrance from the Kew Gardens site: "Many of the 170 or so species of Amorphophallus produce a variety of obnoxious odours ranging from rotting meat, dung and rancid cheese to a nauseating gaseous stench".