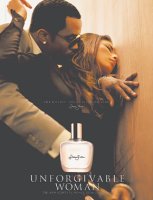 Sean John Fragrances will follow up on 2005's Unforgivable for men with Unforgivable Woman, due for launch in August.

...particularly fond of the piña colada note. "I think we all have an emotional connection to the piña colada — nobody has a bad sense when they smell the piña coladas," he said with a laugh. "I had this vision of a woman being on the beach, and the Unforgivable man sees her — and [the fragrance is] just the way that that feels, the heat of it..."