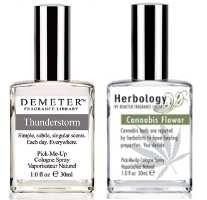 Thunderstorm was released by Demeter a few years back. It is an extraordinarily evocative scent, almost uncanny in its ability to call up a thunderstorm in early spring: the electricity, the humidity hanging heavy in the air, the almost-metallic rush of ozone. The really fun part — the part that actually smells like a storm — doesn't last long, but while it does, it is eerie enough that you could probably cause a small child to have a nightmare by spraying it in their room as they were sleeping.

The dry down is the smell that is left after the storm, largely wet leaves and water-soaked earth, and something vaguely chalky that almost mimics the smell of rain drying on hot pavement. After an hour or so it smells mostly of dirt and roots. The lasting power is reasonable if not quite spectacular. Demeter also makes a Rain fragrance, and they describe it as "cleaner and more delicate"; I assume it is similar to the dry down of Thunderstorm but please comment if you've tried both.

Cannabis Flower joined the Herbology Collection this year, along with Green Tea, Ginseng and Ginger. Demeter describes the fragrance as "the shredded flowers of Cannabis Sativa, the hemp plant", and admittedly, I've never smelled the shredded flowers, but if you're looking for the smell of marijuana you won't find it here. Ok, there is the teensiest little suggestion in the dry down, but I asked an entirely random sample of innocent bystanders to guess what it was, and none of them did. This is a greenish floral, mildly sweet, and very pleasant if not what I expected.

Fragrance names that caught my eye while browsing at Demeter: Coriander Tea, Holy Smoke, Lobster, Mesquite, Pruning Shears. Please comment if you've tried any of them, or the recently released Demeter Play-doh, or if you have another favorite from Demeter. I have only barely scraped the surface.