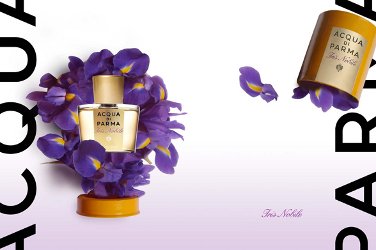 Acqua di Parma launched Iris Nobile in 2004, and the original version, in Eau de Toilette concentration, is one of my favorite summer perfumes, a beautiful blend of iris and orange blossom with just a hint of anise. This year, Acqua di Parma follows up with an Eau de Parfum version that puts a chypre twist on the original formula. Notes include bergamot, tangerine, iris, star anise, ylang ylang, oakmoss, vanilla, amber crystals and patchouli.

As you would expect, the Eau de Parfum is a denser, richer fragrance than the Eau de Toilette. The sparkling, summery feel of the original top notes has been replaced with something darker and flatter, and the anise and the orange blossom have both been toned down a notch. The heart is earthier, marginally sweeter, and more directly focused on the iris notes. The iris continues to intensify into the base, which features a woodsy patchouli-oakmoss blend tinged with amber and vanilla. As advertised, it has the feel of chypre, but rendered here with a very modern touch — if you think you don't like chypres based on old-fashioned versions like Miss Dior, Guerlain Mitsouko or Grès Cabochard, fear not, Iris Nobile doesn't have that musty feel that heavy concentrations of oakmoss and/or patchouli can lend.

I was very excited when I heard about the Eau de Parfum, but what with one thing and another it has taken me months to get around to obtaining a sample and actually trying it on skin. It is just as well as it is more of a fall than a summer scent. It is still not a heavy fragrance, mind you, but those who complained about the lasting power of the Eau de Toilette will be pleased with this new version, as will those who were disappointed to find that the original was as much about orange blossom as it was about iris. I still haven't decided if I need it. It is nice enough, but it certainly isn't going to replace any of my deeply adored iris favorites like Bois d'Iris, Hiris, Iris Silver Mist or L'Homme de Coeur, and for that matter, I think I still prefer the Eau de Toilette. I will try it again as the weather gets colder and see what happens.

The Eau de Parfum version of Iris Nobile is available at Neiman Marcus, and should eventually be everywhere the line is carried; see the listing for Acqua di Parma under Perfume Houses for more details.

5 Perfumes that Got Lost in the Shuffle