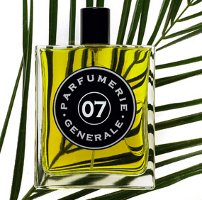 Cologne Grand Siècle is no. 7 in the Parfumerie Generale line, which now comprises 15 fragrances. It was launched in 2005 and has notes of tangerine, bergamot, bitter orange, grapefruit, lemon, cardamom, herbs, ylang ylang, dry woods, vetiver and wheat.

I am very fond of classic colognes. The term cologne is now used somewhat generically to indicate any fragrance with a concentration that is less than an Eau de Toilette (usually that means less than 5%), but here I am referring to the descendants of the original, citrus-based Eau de Cologne first created in 1709 by Johann Maria Farina, an Italian perfumer who had settled in Cologne, Germany.

According to Parfumerie Generale, perfumer Pierre Guillaume limited his palette for Cologne Grand Siècle to natural, certified organic ingredients that would have been accessible in the 18th century. Given that, you would not expect it to be a startlingly unusual fragrance, and it isn't: it is a very nicely done rendition of a classic cologne, with dry sparkling citrus, a handful of spices and herbs, and a mild woody-earthy base. And while I most wholeheartedly admit that I probably wouldn't know the difference, it smells like it was made with natural ingredients.

The lasting power is not spectacular, but it is far better than most Eau de Colognes, and the citrus notes especially seem to linger longer than you would expect. Cologne Grand Siècle also layers beautifully with one of my other favorites from this line, L'Eau Rare Matale (and I hope to do a comparison with the newer, more concentrated Hyperessence Matale soon).

Cologne Grand Siècle is available in 50 and 100 ml bottles of Eau de Toilette. For buying information, see the listing for Parfumerie Generale under Perfume Houses.