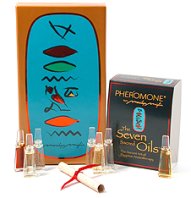 Marilyn Miglin has released a box set of Seven Sacred Oils in conjunction with the last tour of the King Tut treasures, which opened at The Field Museum in Chicago on May 26. The oils comprise ingredients of Miglin’s Pheromone fragrance, which was launched at the opening of the first King Tut exhibition at The Field Museum in 1977:

The Seven Sacred Oils collection contains seven oils cherished by ancient Egyptians for their powerful behavioral effects. They include Spikenard, to stimulate psychic powers; Olibanum, to stimulate the sense of smell; Palm, to revitalize energy; Myrrh, a cherished blood stimulant; Juniper, to calm and cleanse, Fo-ti-tieng, a sexual stimulant; and Lotus, to recall the sweetness of a woman. Marilyn Miglin discovered these special ingredients during a journey to Egypt, where she scoured temple reliefs and ancient hieroglyphs for hints of ancient perfume techniques. These recipes, in addition to traces of fragrances left on ancient perfume vessels, gave Marilyn Miglin unique insights into the treasured scents of the Pharaohs.

The set retails for $125 and is packaged in a gold box that features the cartouche designed for Miglin by The Field Museum. Read more at marilynmiglin or fieldmuseum.org. Thanks to Sara for the tip!