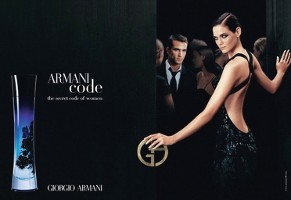 Armani Code is the latest perfume for women from the Giorgio Armani line, and is meant to be the female counterpart to their best selling fragrance Armani Code for men (originally released as Armani Black Code). It was created by perfumers Carlos Benaim, Dominique Ropion, and Olivier Polge of International Flavors & Fragrances, and has notes of of orange, orange blossom, ginger, pear sorbet, jasmine, vanilla, woods and lavender honey.

Armani Code opens with fresh orange and ginger, and the top notes have a nice zing. After that, it is all very soft and muted and indistinct, with vague honeyed florals and even vaguer hints of fruit — I would not have guessed pear — over a warm but mild base of vanilla and pale musky woods. A touch of the ginger lasts into the dry down, but not much: it isn't particulary spicy after the first 30 minutes have passed. Happily, it also isn't overly sweet.

Armani is positioning Armani Code as a sexy, femme fatale kind of perfume: "a woman's mysterious code of seduction revealed" and all that. It is a very pretty, wearable fragrance, and I would pick Armani Code over any number of the sugar-laden fruity florals on the counters at present, but it strikes me as more safe than sexy, and as with many of the big name fragrances released this spring, the bottle seems more unusual than the juice itself.