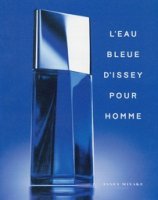 Issey Miyake’s 2nd men’s fragrance, a follow-up to 1994’s L’Eau d’Issey pour Homme, smells more like something that might have been created for Comme des Garcons than Issey Miyake. A far cry from the citrus-packed L’Eau of the early 90’s, L’Eau Bleue is an unusual mélange of mandarin orange, lemongrass, rosemary, elemi, star anise, nasturtium, may rose absolute, ginger absolute, palmarosa, patchouli, sandalwood, and musk mallow. It was created by perfumer Jacques Cavallier.

A surprising blend of notes that might work well in a dish at your local Thai restaurant, L’Eau Bleue is anything but your standard aquatic fragrance. Herbaceous, sharp, and truly all about patchouli, L’Eau Bleue is simply not going to be for everyone. I’ve often complained that the many designer fragrances of recent years lack all originality and creativity. With L’Eau Bleue, I think Issey Miyake may have headed in a very interesting albeit perhaps too “natural” direction.

I originally tried this scent when it was first launched in the summer of 2004. I quickly dismissed it when my stepmother asked if I had just applied Vicks Vapo Rub. But after a friend’s comment that L’Eau Bleue smelled to her like a country meadow, I just had to revisit it.

The fragrance opens with an effect similar to standing too close to an essential oil display in your local whole foods shop. Rosemary, lemongrass, ginger, anise and orange combine to create a calming herbal tonic. As the tang of the mandarin quickly settles, an earthy yet subtle patchouli (!) begins to emerge. A hint of floral nasturtium and rose surface in the middle stages of the scent, and from there the composition fades to a just-washed skin effect…just-washed with a soap that your favorite neighbor who’s still firmly rooted in the 70’s makes in her guest bathroom on the weekends and sells at the local church bazaar. After an hour the topnotes had all but faded, leaving behind a slightly sweet and mellow patchouli and sandalwood blend.

The jury’s still out on whether this is a thumbs up or down because, well, it’s just so darn unusual. Just when I think I’m ready to once again dismiss it, I sniff my arm yet again and am surprised by how much I like the scent, and then I remind myself that it’s actually L’Eau Bleue.

L’Eau Bleue is a throwback to such unsuccessful herbal fragrances as Joseph Abboud’s eponymous men’s scent and Guy Laroche’s Horizon. Whether this fragrance will fare better than its other herbal predecessors remains to be seen, but the bottle certainly is striking. Leave all ideas of what a “Blue Water” might smell like when trying this one. Its originality will surprise you.

L’Eau Bleue is easily found online at sephora or any of the major perfume discounters.

Note: Please feel free to comment, but Marlen is offline for the holidays and not sure when he'll be able to respond.