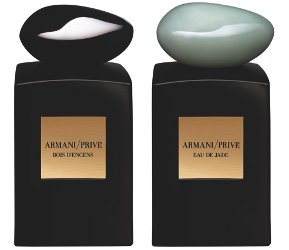 Bois d'Encens, also known as Onyx, is the fragrance that Armani reportedly had developed for his own personal use:

"This is my favourite of the four scents and smells strongly of incense," says Armani as he covers himself in a fine mist of Bois d'Encens from a little bottle he keeps in his pocket. "I used to go to church with my grandmother and the services were pretty long. The thing that kept me going was the smell of the incense. This fragrance reminds me of that time. It reminds me of my childhood." (quoted in The Independent, 1/22/05)

Bois d'Encens is said to contain only 5 ingredients, including vetiver and two kinds of incense. I don't know what the fifth ingredient is, but the fourth is surely cedar, which dominates the opening and remains prominent throughout the dry down. As the cedar calms, the smoky incense notes begin to heat up, and there is a nice peppery-earthy undertone from the vetiver.

That is the whole story: cedar-y church incense. It is very dry, and probably the most masculine of the group. It is not a complicated perfume, but then, sometimes simplicity does the trick. Pierre de Lune still strikes me as the most interesting of the quartet, but Bois d'Encens is the only one that captivated me, and the only one that I would even vaguely consider buying if I had the money. Which I don't.

Eau de Jade will get less attention than the other fragrances for the simple reason that I no longer have a sample. The notes are bergamot, neroli, and bourbon vanilla. I tried it briefly earlier this year, and it struck me as a soft fresh citrus, slightly soapy, with just a hint of vanilla.

It was perfectly nice, rather along the lines of one of Olivia Giacobetti's limited edition summer fragrances for L'Artisan Parfumeur. At L'Artisan prices, I would have given it a second try, but I was not immediately entranced, and as I just couldn't wrap my mind around the idea of paying $185 for a soft summer citrus, I passed my sample on to someone else. If I missed the boat on this one, do comment, although given the price perhaps I am better off remaining in ignorance.